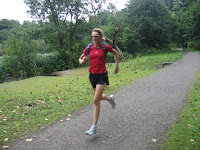 I sometimes join the 3 Ms (Moira, Maureen and Mairi) for an early morning run on Wednesdays and Fridays. They have been doing early runs for years ever since Maureen’s now grown-up children were young. For them, these morning outings are the ideal opportunity  to squeeze in a run before their children get up and/or their husbands head off for work.

While I could run at other times in the day because I work from home, I find that getting up early and getting  out the door for a run gets it over with before I have time to think.
Admittedly I’m not as dedicated as the 3 Ms. I don’t always find it easy to rise at 6.30am for a 6.45am start (especially after tri club hill reps the night before!) but today I managed it.
The usual run  is a well-worn three-mile route around Bearsden and we tend to run on autopilot, while also catching up on chat and gossip.
But today, we took a different route and one I had never run before. It’s always nice to find new routes, especially if you’ve been living in an area for a few years, and even if the going was quite tough. At 7 in the morning I am not at all at my best and the hills on this run, that headed from Bearsden via Westerton, where short and steep-ish. Still, the chat was non-stop (my husband would say we weren’t running fats enough if we could talk!) and the 3Ms are great company so the run felt like it was over quite quickly.
I was back home and showered by 7.40am in time to wake my daughter up and to say bye to my husband as he headed to work.
How good it feels to do the walk to school knowing you’ve already done your daily exercise. The only thing is that by 2 in the afternoon I’ll be falling asleep at my desk!
Share