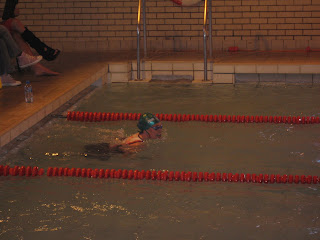 ….That keep you going.

Pic is of me utterly failing to swim like a pro at last year’s Peebles Triathlon. Will things be any better in 2009?
There are times when I feel as though I’m make no progress at all with the various sports that I do. Mostly I exercise for enjoyment but there is still a part of me that strives to improve. And this week – after of months on a seemingly long, flat plateau – I have had a couple of minor but exciting breakthroughs. The first wee improvement has been in yoga. After the session yesterday morning Jo-Yo said she was amazed by the sudden increase in my hip and back flexibility. I, too, have found it much easier to get into many of the poses.
This is not to say that I’ve suddenly become what you could call “supple”, but I have now feel less “arthritic old lady” and more “middle aged stiffy”.
I can’t give a reason as to why this has happened. I have not been practising in between the weekly sessions but perhaps it is to do with consistent attendance at the classes. I have now gone from thinking that I would never get much out of yoga, to wanting to achieve greater things!
The same wee improvement has come in my swimming. When I first joined the swimming sessions at the Tri Club I swam like clothes in a washing machine. I had never been taught the crawl and so I had no idea just how technical it is. I now think it’s rather like driving: there are so many different aspects to get think about and get right at the same time.
For those who learned to swim as a child, the technique seems to come together naturally but for someone who has had to completely relearn to swim it is a frustrating nightmare. It has taken 2 years of going, giving up, paying for one-to-one lessons, giving up and then going again to finally make it out of the beginner’s lane and in to the lane with the intermediate swimmers. (I still find myself  trailing behind these super-slick guys some 10 mins into the session but at least I make it to the end of the session without wanting to cry.)
Most of the progress has come thank to some excellent Tri Club coaching. Pointers about my leg kick, my arm pull, my head position and turning have made significant differences to my overall performance. Although swimming will always be a difficult sport for me I can now manage to complete a session without feeling utterly wrecked – and, most importantly – I want to go back to improve some more.
Share