Kids on the run 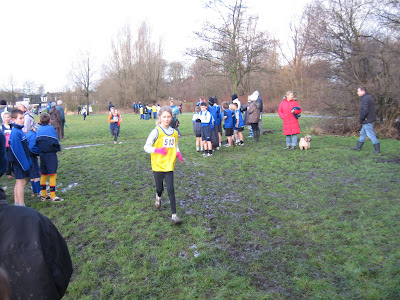 Today was the second race in the East Dunbartonshire Schools Cross Country League (organised by the Kirkie Olympians). My daughter Havana’s school, Mosshead Primary, takes part so we were up early to arrive at Kirkintilloch for 8.30am. Most of us (parents included) managed to get extremely muddy doing a walk of the course before the first race, the Primary 6 girls, got underway.
The star of our school was Rebecca (who is usually up there in the first four or five along with her Fabulous Running twin Hannah). Today Rebecca came in a superb 4th (sadly Hannah ended up pulling out of the race because she felt sick). Other front runners for Mosshead included Rheagan, Lucy (my running pal Rachel’s Fabulous Running daughter) and Kirsty (my tri club pal Ross’s Fabulous Running daughter).
Further down the field but still enjoying herself was Havana. She grinned as she crossed the line, which is how it should be. Strangely, despite being a girly girl, Havana loves the muddy races – and this one at Oxgangs Primary was about as muddy as they come.
Other races today included the P6 boys, plus P7 girls and boys. We’ll find out how everyone did in due course. But even just turning out on a cold wet Saturday morning has to be commended.
It just goes to show that not all of today’s kids are as lazy as the stats would have us believe!
Share