The Tri Club isn’t just about fab training and coaching, it’s also a lot about making friends. When I first went freelance I realised with a sudden gut-wrenching jolt that I missed people. I missed the office banter and the socialising. So I looked around for a club to join. Obviously the club needed to involve some kind of exercise, and this exercise needed to take place on “my” nights of Tuesday and Thursday. And so I found the Glasgow Tri Club.

Over the past few friends I’ve made some great friends through the club – and because most of them are a little nuts there is always at least a
dozen people doing something adventurous on any one weekend. This weekend proved my point per
fectly.

On Saturday, despite
forecasts of howling wind and rain, two o
f the Tri Club guys, C & J, decided they
would venture out for the first bike ride of the season. When they invited me I agreed with a reluctant s
mile. You see, I know that I need to get some cycling miles in my legs because I’ve signed up for the Etape Caledonia in May. This epic 90-mile ride up north is supposed to be gorgeous, but also a leg-burner. But since I’ve not been on a proper ride for about 5 months I
worried the boys would out-ride me.
In the end the afternoon couldn’t have been more
pleasant. With only a slight threat of rain and just a quietly howling wind,
the conditions seemed pretty good when we set out from J’s in Erskine. Meeting C en route to
Bridge of Weir we then spent three hours trundling around Renfrewshire, chatting,
joking and pushing out the miles. Our route included the wonderfully flat and
traffic-free cycle way to Port Glasgow, a testing (eh, J?!) hill out of Gourock (one
mile, my erse, C!) and some fantastically scenic countryside as we rolled back towards Bridge of Weir.
The only really strenuous section was the final eight miles back t
o Erskine in a building head wind. I swear, too, that someone had been out building roundabouts all afternoon.
I’m sure I counted way more of the fre
aking cycling interruptions on the way back, than on the way out.
It felt great to have finally made it out for a decent ride on the bike, and now the Etape only looks moderately massively daunting!
Normally this would
have been enough exercise for one weekend but one of the
Tri Club girls mentioned an unofficial urban Rat Race style outing (organised by
one of her Bellahouston running club pals) on Sunday in Glasgow. How could Ms Outdoors
resist?
So at 8.30am I pitched up in chilly George Square where
I was invited to join a girls’ team of two (Louisa and Hollie) for two hours of fantastically
fun orienteering. The concept of the event was to try to tick off as many checkpoints spread for miles across the city centre. More points for more distant checkpoints. 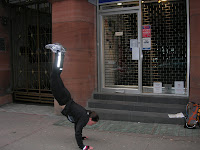 You could also gain  points along the way for taking part in activities and performing certain tasks. Eg having your pic taken with a  Chinese tourist, wearing a policeman’s hat while being
handcuffed, pole dancing, juggling. I kid you not!
Pic of Louisa performing a hand-stand
outside Run 4 It
If running for two hours has ever seemed like a total bore/chore then you should 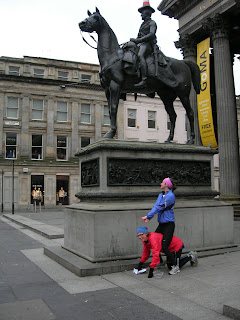 try urban orienteering.
The time and miles just disappeared in a blur of ticking off checkpoints,
navigating, laughing and chatting. By the time we arrived back at George Square, having ticked off all but about eight checkpoints, we were not at all surprised to find we needed to have our pic taken while growling like a lion (in front of a lion statue) and complete a circuit of George Square on a space hopper. That pedestrians were watching in amazement  didn’t bother us in the slightest. We were high on adrenaline and relieved to finally sit and rest our weary legs.
Pic of Hollie and I acting
out the statue!
Thanks Louisa and Hollie for putting up with an old lady like me. I had a ball! If only every long Sunday morning run could be as much fun. . .
Share