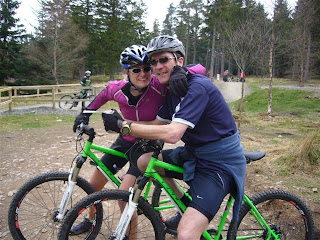 Sometimes I forget just how lucky we are in Scotland. And then I spend a few days in our great outdoors and it all comes back to me with a great, splendid feeling of warmth. Over the last 10 days I have been lucky enough to mountain bike in three of the 7stanes mountain biking centres and take part in a 100km Audax (a cycling challenge that is not a race but requires the rider to meet certain checkpoints in a given time.)

Last Monday Mr Outdoors and I took our good friends G&T and their son Master A (he should be renamed a “ice and a slice of lemon”.. anyways..) to Glentress for a few hours of mountain biking. Being from doon south they were completely amazed to find the fantastic network of bike routes – and all com 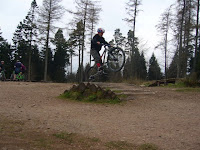 pletely free. I guess we have come to take the work of the Forestry Commission (and all the volunteer trail fairies) for granted but to G&T Glentress represented something “totally awesome” and “out of this world”. Master A (pic left) spent the afternoon shadowing his shiny new hero Mr Outdoors. It was difficult to decide who was acting more like a 10-year-old boy (Master A who is actually 10 or Mr Outdoors who is edging 50!) as they wheelied up tracks and flew off jumps and over obstacles.

Then, over Easter weekend, Mr Outdoors and I headed to Dumfries and Galloway, which surely has to be one of Scotland’s best kept cycling secrets. Away from the two main roads that cut through this region, is a network of some of the most beautiful, almost traffic-free lanes I have ever come across. Cycling the 100k Audax, led by Scotland’s most enthusiastic Audax rider Tom, was an utter 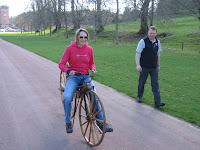 pleasure. We even passed by the old smithy where Kirkpatrick MacMillan made the world’s first ever bike. (I later took a replica of this bike for a spin at Drumlanrig Castle. See pic left. How MacMillan ever managed to ride the bike from Dumfries to Glasgow and back is mind-boggling. It was heavy, a nightmare to pedal and almost impossible to steer.)

During the weekend we also learned how to wheelie and bunny hop with mountain biking expert Clive at Ae Forest and took in the blue route at the gorgeous and amazingly extensive Kirroughtree 7stanes centre. Thanks to the patient guidance of Clair from the brakepad I learned how to descend some of my first properly stony slab sections (normally I get off to walk round like on old lady for fear of breaking a few bones). I’m thinking of heading back there for a Women on Wheels weekend.

The fabulous sunshine definitely gave the whole trip some added polish but even so this is a location we plan to return to more often. If you fancy it then why not take in the first ever Original Bicycle Festival taking place from May 9 to 24?

When the sun has got his hat on and you’re outdoors, it is difficult to imagine being in a better place than Scotland.