How far would you go for a fish supper? 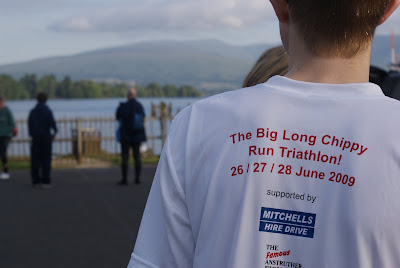 Some people will go a long way to buy a fish supper – but it could be that myself and fellow members of the Glasgow Triathlon Club went the furthest ever this weekend. I blogged previously about the Big Long Chippie Run triathlon but I had no idea, until taking part, what a hugely fantabulous event this would be. Every single person who participated or supported the event arrived at Sunday evening exhausted but utterly uplifted. Some people said it was one of the best weekends of their lives.

The event saw members cycling from Helensburgh to the southern end of Loch Lomond. An 11.5 nour relay swim took our triathletes some 22 miles north to the top of the stunning loch. After a fairly nightmarish night (for those eaten alive by midges at Beinglas Campsite. PS It won’t help now but you could read my summer guide to nasty Scottish beasties for future reference!) the following day comprised a mass 95-mile cycle to Kinross. While some went the whole distance others did whatever mileage they fancied, while being supported by a Mitchells Hire drive van and mini bus. (Thanks Mitchells for your generous sponsorship.)

Sunday was another fabulous cycle (should have been 27 miles, ended up 40 miles due to terrible navigation!) and then a 11-mile run. The final mile of the run involved all participants as we ran together into Anstruther.

While utterly knackered I have to say it was one of the most amazing weekends I’ve ever enjoyed. Fab company, an amazing route and all for charity. Plus I don’t think a fish supper has ever tasted so good as it did yesterday after cycling and running some 52 miles!

The End at the Anstruther Fish Bar

…And you can still donate money to the three charities in recognition our epic effort.