One sister walks Five Sister – but where are all the other sisters?

We found Scotland at its best again last weekend when Mr Outdoors and I joined dozen or so other walkers to hike The Five Sisters of Kintail. The outing was organised to raise money for Water Aid and was initiated by a group of workers (including one of Mr Outdoors’s sons) from Edinburgh.

With three Munros, a Munro top and a Corbett to complete during the magnificent, seven-hour ridge walk, this outing was clearly meant for the generally fit. But surely this doesn’t mean that all women are incapable/uninterested of/in such hikes. 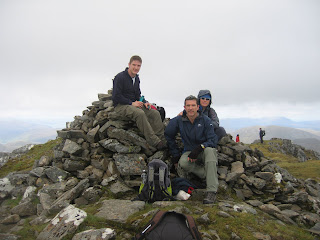 To start with it appeared that I might be the only woman on the ridge that day. Being the only female in our large group of men I was surprised to find that all their various wives/girlfriends had decided to stay home. When asked, the guys suggested that the WAGs were “happier at home doing a bit of shopping”, “not fit enough”, “not interested enough”, “not bothered enough”.

Of course, the lack of women could be because the girls were simply content to have some peace and quiet at home while the guys head off for male-only weekend (except I was there!).

But it wasn’t only our walking group that was notably lacking in girls. During the entire day I saw only three other women. Now this was a busy route and the weather was mostly fine so it was pretty surprising to find myself in such a male-dominated arena.

Still, it made little difference to my enjoyment of this fabulous walk. The guys in our group proved that they can chat as much as the girls and have as many laughs. The atmosphere was up-beat and the pace was perfect. And if they minded that there was a woman among their laddish group they never said it out loud.

But, really, sisters. You don’t know what you’re missing….