Pull of the Munro Bagging Bug

So now I can see why so many people are Munro bagging addicts. I have always loved the Scottish mountains and almost everything else that goes with our great outdoors but until this weekend I’d somehow managed to resist the pull of the Munro Bagging Bug (MBB). Then, all at once, at the top of the third Munro in Glen Carron on Saturday I could feel the hands of the MBB taking a grip around my mesmerised brain.

Looking down from the 933m summit of Maol Chean-dearg and out towards the Torridon mountains and further afield to the Cuillin ridge on Skye it was as if the MBB lightbulb was suddenly switched on. The views were awesome and the immense feeling of cracking three big Munros and a total ascent of more than 2000m in one day totally blew my mind. Of course, the fabulous weather helped and so did the good company of three avid hill walking friends.

On that day we summitted Beinn Liath Mhor (926m), Sgorr Ruadh (962m), as well as Maol. The challenge was pretty big with lots of steep ascent and descent but I loved it all. I am pretty fit but not “walking fit” so the outing was one of the most epic I’ve ever taken on. But still I could feel a lightness in my step, and heart, as we completed the final couple of miles towards the car – and a large beer. 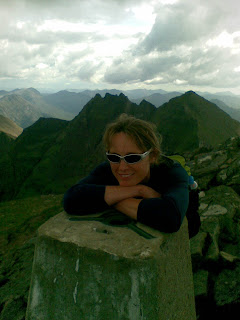 Sgurr Fiona is the summit in the background on the right (I think?!)

This should have been more than enough walking for one weekend but on the Sunday there was a plan to complete two more Munros, this time An Teallach (Bidein a’ Ghlas Thuill at 1062m) and 1060m-high Sgurr Fiona (how was I going to resist climbing to the top of a Munro with my very own name?!). Despite sore thighs and a general tiredness I realised I was up for the challenge of another eight or so hours of walking. Again the weather was extremely kind and the views were astounding. Added to this we saw some amazing wildlife, including pretty dragonflies and gorgeous wee orchids.

There were several highlights, including the scramble (I momentarily overcame my irrational fear of heights) to summit Sgurr Fiona (she was a feisty girl!) and finding a stunning waterfall and rock pool towards the end of the walk. 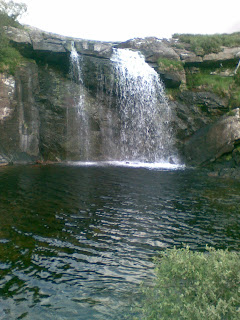 The only problem with such a spirit lifting weekend is that the normal Monday morning blues are strikingly worse. I found myself extremely flat all day – and dreaming of the next time I could head to the hills.

Meanwhile, Mr Outdoors had been on the Cuillin Ridge with his twin sons and returned as (almost) high as myself. He’d managed to crack some of the toughest sections of the ridge and as this has been a long-held dream he was delighted with the achievement. He tells me that he is still resisting the call of the MBB but i reckon it’s only a matter of time!