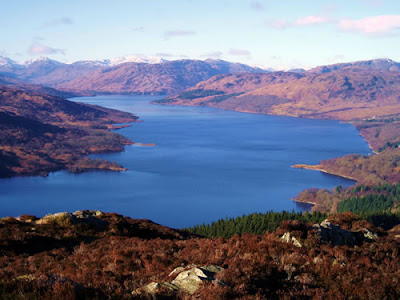 After 10 days of being laid tragically low by a summer cold (not had one of these for many years) I found I could no longer cope with the lack of exercise and the amazingly good weather… so I decided on a bike ride.

(I’d already tried yoga but the upside down postures just caused the copious amounts of “cold gunge” to go straight to my head almost causing me to drown in snot. And one try-out run was impossibly slow and possibly dangerous.)

Now proper cyclists that I know will probably laugh when I tell you that I “drove” my bike to Aberfoyle for a circuit of Loch Katrine and the Duke’s Pass. But I wasn’t feeling up to the extra miles from Bearsden. I’d been ill, OK? And I’ve hardly been on my bike for months. OK?

While I’d heard plenty of people raving about this route I’d never actually got around to doing this ride and, boy, have I been missing out. Undulating in all the right places, with a few opportunities for hill efforts plus the ascent, then incredible descent, of the Duke’s Pass, as well as the ice cream stop at the pier and stunning scenery all added up to a fantastic outing.

I was pleased to find that my thighs, which had been burning a little on the uphills throughout the circuit, were almost fine the following day. And the ride seems to have almost completely knocked my cold into touch. Now it’s back to proper running again – and maybe I will throw in a few more bike rides with summer suddenly making an incomprehensible return to Scotland.