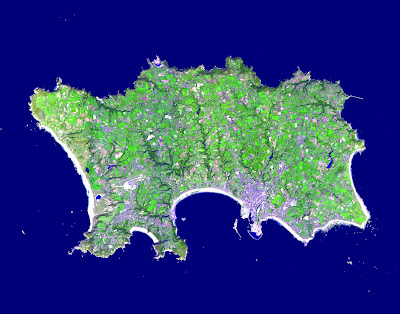 Hmm. While I’m a little loathed to admit this, I have discovered a great new outdoors playground that isn’t called Scotland – instead it’s called Jersey. Ha, ha, I hear you laugh, isn’t Jersey just for old people and the very rich? Well, yes, the island – just 15 miles from the northern French coast but still a British Crown Dependency – does have more than its fair share of elderly people with big bank balances (plus an amazing number of stunning detached houses) but it also offers a fabulous holiday destination for people like me (ie not old and with little savings).

During a recent trip to Jersey, I found a jewel of an island that while tiny (it measures only nine miles by five miles) manages to pack in a host of attractions, especially if you’re keen on the outdoors life. The picturesque isle boasts a stunning and varied coastline, numerous sublime beaches, many miles of quiet cycle paths and roads, wonderful cliff top walks and so many alfresco eating and drinking spots that you could visit a new one every day for weeks.

Jersey Adventures is one of a number of companies that have capitalised on the growth in outdoors adventure holidaymakers, but it is the island’s only fully qualified provider of outdoor pursuits and therefore the best place to head for a range of activities. While on Jersey I went rock climbing at a fabulously scenic cliff face and sea kayaking along a gorgeous stretch of coastline on the south-western corner of the island. I also tried coasteering for the

For the uninitiated, coasteering essentially means a traverse of a section of coastline. Wearing wetsuits, coasteerers (if there is such a word!) scramble over rocks, walk beaches, swim coves and sea pools and jump from cliffs into the ocean to get from A to B. It is tremendously exciting and can be geared as an activity to suit many abilities. For example I totally wimped out of a 12m high cliff jump and plumped instead for a smaller leap without affecting the expedition.

Then again if you’re looking for something a little more relaxing but still outdoorsy then Jersey also does a great line in old-fashioned style beach days. Even during October, families were taking advantage of mild temperatures and heading to one of the many wide, sandy beaches for a day of sandcastle building, rock pool foraging, picnics and Jersey ice creams.

Many of the beaches were also lined with wonderful cafes, serving a wide range of foods including delicious fish dishes and my absolute favourite, moules et frites (mussels and chips).

Jersey has other holidaymaker attractions ideal for a rainy day or simply because you want to do something different. While on the isle I visited the fascinating Gerald Durrell Conservation Zoo, the Jersey War Tunnels museum and the La Mare Wine Estate. But these were just a few of the highlights that would easily keep a family occupied for a fortnight or more. For further ideas see Jersey Tourism’s excellent website.

Accommodation on the isle ranges from beautifully kept campsites and self-catering lets to some of the most amazing hotels I’ve ever seen. I was lucky enough to be hosted at the Atlantic Hotel. I wouldn’t normally be able to afford such luxury but the occasional press trip offers a glimpse of how the better-off might holiday – and how they eat. The Atlantic also boasts a Michelin starred restaurant and the meal I enjoyed was quite simply the best I’ve ever had.

So, while Scotland is still, in my opinion, Europe’s best location for outdoors pursuits, I’m placing Jersey in the top league, too.