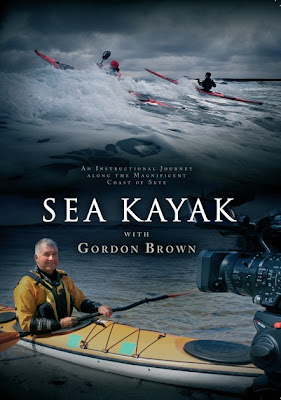 A new kayaking DVD filmed by fellow journo and friend Simon Willis has far exceeded all sales expectations. Simon, of Sunart Media, who is a keen sea kayaker himself, was initially advised to produce just 700 copes of the DVD, SEA KAYAK WITH GORDON BROWN, one of the world’s top coaches. Priced at £19.94 in the UK, the excellent instructional guide – aimed at novice and intermediate kayakers – did in fact sell 600 copies in the first 10 days, after the release on November 1. (The DVD is offers newer, easy to view version of the already popular book of the same title.)

Another 1000 DVDs were then produced, of which there are now only a few hundred left. Simon reports that there is sadly no time left to print more before Christmas. So my tip is to get your order in quickly if you want to avoid disappointment. For a taster of the video see here

What is obvious is that the adventure activity of sea kayaking shows no signs of slowing in popularity. I have already posted a blog about the huge growth of sea kayaking in Scotland following an excellent two-day sea kayak outing with the National Kayak School at Oban.

Over the last couple of years the school has seen a huge growth in demand for sea kayak instructional courses and multi-day trips. Many kayak shops also report fast-growing sales from a range of adventurers, including families.

Sea kayaking offers a great way to view Scotland’s wonderful landscape, whether on our sea lochs or the open sea. It is important that kayakers learn basic skills and navigation before setting off on their own adventurers but in only a short time they will have the freedom to enjoy some truly scenic and inspirational journeys.

And another publication by Simon, Europe’s first long distance sea kayak trail, THE SCOTTISH SEA KAYAK TRAIL is also proving a big hit – and reveals that kayaking in Scotland, in particular, is a big passion for many people.

You really have to give sea kayaking a go to find out just how fantastic it is.