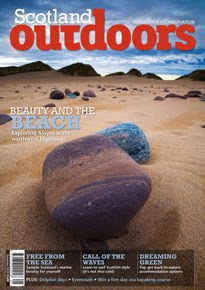 I’d always hoped that a new Scotland-based outdoors magazine could make it in what is an extremely difficult niche marketplace. And it seems that finally one such magazine has pulled it off.

The quarterly Scotland Outdoors magazine, edited by Richard Rowe, was recently recognised in the PPA Scottish Magazine Awards at Our Dynamic Earth in Edinburgh.

It’s credit to a small but determined team on the magazine – that works within an extremely tight budget and in difficult economic times – that the mag should win such a coveted national award so early in the magazine’s life.

It’s brilliant, too, to see the magazine’s dedication to quality writing and photographs. All too often new magazines try to go for the cheapest option, using free and inexperienced writers and photographers. But as far as I can see Richard has maintained a highly professional approach to publishing a good quality magazine both in content and looks.

I have been lucky enough to be published in Scotland Outdoors. And I’d write for them again without hesitation. Richard was a pleasure to work with – and, brilliantly, the magazine pays on time. This is no mean feat these days.

Keep up the great work guys.