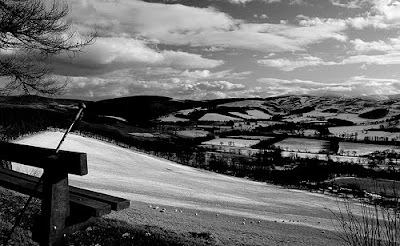 I’ve blogged a few times about the seemingly disproportionate number of men enjoying our hills and the great outdoors in general. In fact, every time I’m out and about I make a point of trying to keep a tally of men to women.

The proportion is usually very few women to lots of men.

So it was with great delight on Saturday that I counted an even number of women to men during a glorious run in Glentress forest. (Yes, I know this is where you’re meant to get out on a mountain bike but it’s also one of my favourite places to run – and conveniently located next to my parents’ house).

As I ran and everyone else cycled I counted. Okay, okay, so I only actually counted three other people (it’s still very icy on the Glentress trails) but one was a woman and two were male. If you include me in the tally that’s a 50:50 split for the first time. Ever.

Come on girls, one day I’ll be enjoying the outdoors and pass more women than men.

Anyway, as I said, the run in Glentress was gorgeous. It doesn’t really matter what time of year you’re out in the forest as the views are always stunning. On Saturday as I climbed and climbed I looked out over beautiful whitened hills and snow-capped trees. The snow was piled high on either sides of the trails, too, which made the forest seem even more magical than normal.

And the descent was fantastic. After all the climbing the downhill kept coming and coming until my thighs felt they could take no more. It was great to feel the cold air in my lungs and to reach the end of my run just as the sun began to set.