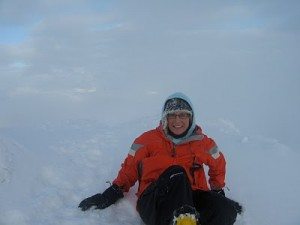 Yet more glorious hiking and climbing in Scotland’s amazing winter wonderland this weekend. I think perhaps I have struck it lucky and embarked on my first experiences of winter walking during a year of unprecedented stunning conditions!

According to so many other people who have walked through other Scottish winters, conditions are normally awful and so rarely calm and gorgeous. In fact, as one walker I met on Saturday put it: “Surely this can’t be Scotland, can it?” – as we surveyed the glorious 360-degree panoramic views.

And, of course, in the last few weeks there have been several deaths in the Scottish mountains. These were all experienced walkers/climbers who were unlucky enough to be in the wrong place at the wrong time with two being caught out by an avalanche. This does go to show that I should never underestimate the hazards of winter walking, even during the relatively straightforward ascents of the two Munros near Tyndrum, Beinn a’Chleibh and Ben Lui.

So, setting off early on Saturday to make the most of the winter daylight, I took the precaution of walking with an experienced winter Munroist pal (the “G-Force”) and carrying a very heavy rucksack packed to bursting with winter survival kit, crampons, ice axes, food and hot drinks. 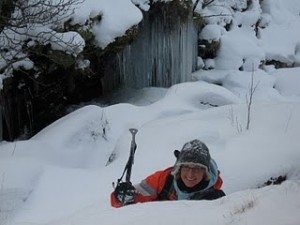 On this outing I even got the chance to use the ice axe and I wore the crampons for most of the day. Normally a reluctant outdoors climber (I hate heights), I now know that I totally love climbing in the snow and ice. While we did not encounter anything too sheer, some of the slopes were steep and did require the use of crampons and a firm ice axe placing. The going was tough but the exhilaration was more than rewarding. The G-Force managed a short but safely located section of vertical ice, too, which looked impressive and extremely exhausting. Maybe next time!

We were also in for an unexpected treat at the top Ben Lui. Just after reaching the summit, three guys also arrived on the peak. Within minutes one of the walkers had the video camera out and began filming his two pals as they sang a mickey-taking pop song to another pal who had been adamant that none of them would be able to wade through the snow to reach the top. Seeing these guys having such a laugh after their trek through the snow was funny and heart-warming at the same time. They were so thrilled with themselves. 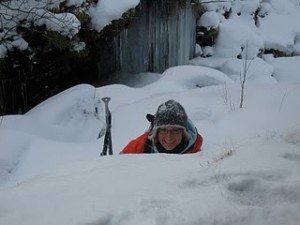 But it wasn’t the last giggle of the day. Because of tired legs on the descent (crampons are very muscle draining) I took to sliding some sown shorter sections on my waterproof trousered butt. I was careful, obviously, not to choose steep slopes and I made frequent use of my ice axe to arrest my speed. I have not had so much fun for a long, long time. Whizzing down sections of a beautiful mountain on my bum was masses of fun and hugely spirit lifting. I don’t think I’ve stopped smiling since. See the grinning pics for myself in this blog!
Share