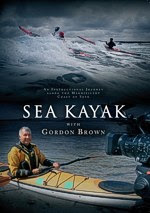 Following news of the accolade, Simon, a former BBC newsnight correspondent who seems to have achieved an idyllic work-life balance at his home in gorgeous Strontian (I’m too jealous!), said: “Whether it’s teaching people to kayak or helping businesses produce a cost-effective training video, the principles are the same. Mind you, it helps that I’m passionate about sea kayaking”.

Released on DVD, the film features exciting and practical instruction from one of the world’s top coaches. Gordon Brown (not our PM! Obviously!) delivers coaching sessions designed for beginners and intermediate sea kayakers. These are mixed with a beautifully shot four-day voyage along the west coast of the Isle of Skye where Gordon lives and from where he runs Skyak Adventures.

You can take a look at extracts from the DVD at SunartMedia.com