A reason to run to Arnison Crag 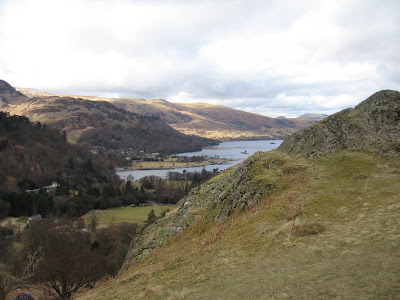 My sense of direction has never been a strong point and this weekend it failed me again. However, as so often happens when I get lost I found myself enjoying a mini adventure. This time I ended up running for about 70 minutes through lovely, undulating Cumbrian fells. But that was Sunday’s outing. Let me rewind to the beginning…

Last July, my good friend Ellen’s brother Nathan died suddenly. Last weekend friends and family (including is wife and two young children) gathered in Cumbria for a memorial weekend/celebration of his life. Nathan had set aside a sum of money in his will, and his closest friends and family members had decided to organise a tribute weekend, which included a beautiful walk to the top of the perfectly named Arnison Crag, near Patterdale, and a hog roast party at a nearby hotel.
The weekend, based at The Inn on the Lake at Glenridding, was one of mixed emotions but almost everyone I met and spoke to said it would have been the kind of weekend that Nathan himself would have really enjoyed. That was the point really, I guess. Someone said it would have been so typical of him to have organised such a weekend and then for a joke, not bother turning up.
I felt extremely privileged to be part of this tribute weekend to Nathan and to meet so many of his closest friends and relatives. While there was sadness, the two days were also somehow spirit lifting, too. Nathan had clearly lived life to the full and was described by everyone as one of the happiest people they knew. He had loved his friends and family and he had always been up for some madcap adventure, a party or a bucketful of beer.
I had known Nathan as a friend of his immediate family and I had always greatly enjoyed his sense of fun and his chat. I will never forget the hilarious moment as he left Ellen’s home after one drunken night in pitch black to cycle to a camp site some miles away. 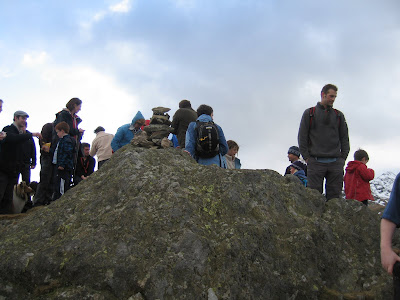 Part of the tribute weekend walk plan was that everyone would bring a stone to build a cairn atop Arnison’s Crag in memory of Nathan. I’d packed mine in my bag but on the day I’m ashamed to say I forgot to pop it in my walking rucksack. I picked up another stone along the way (as did others, some managing to haul boulders up to the top!) and placed this among all the others stones on the summit. But I still felt as though I’d let Nathan down a bit. 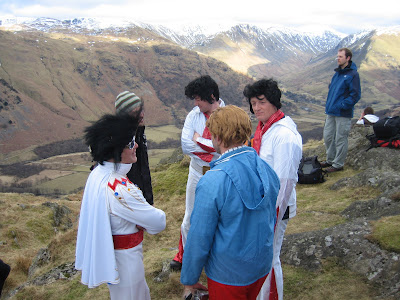 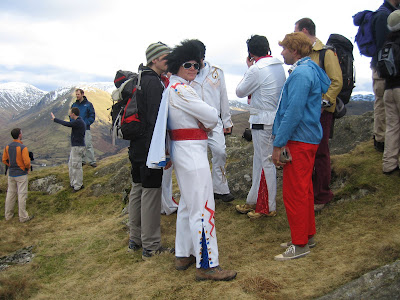 Elvis “rocked” up, too. Well, a whole Elvi, in fact. Apparently
Arnie needed little excuse to dress up! And nor did his friends.
So on Sunday morning I set out to take my stone to Arnison’s crag. Despite a hangover and tiredness (a late night of partying!) I decided I’d run the route. I figured that a two-hour saunter/walk the previous day should take me only 40 minutes at trotting pace – and I’d heard that some fell runners race to the top of Arnison’s Crag in just six minutes.
All this would have worked out nicely if I had not have got lost! (I’m sure I would have managed the top in 10 minutes!) I set out from the hotel and found the start of the crag walk behind the Patterdale Hotel. I only had to ask for directions once! But after this I very quickly seemed to get lost. I’ve no idea how but that’s just typical of me.
Oh well, I thought, at least I will try to enjoy myself. Some 20 minutes later and after a hard slog up a steep “other” hill I came across two walkers with a map. They told me that I was climbing the neighbouring Birks Crag and that Arnison Crag was over there (they pointed).
Yes, I could see Arnison Crag was the next hill along and I realised that if I followed a zig-zagging wall across the fells I might actually navigate my way there. Amazingly I did this. It was a long way round and really blowy but I was on an Arnie Mission and so after almost an hour of running and plodding I got to place my own stone on top of the Arnison Cairn. I’d also managed to head off my hangover.
So Nathan, thanks for some great Arnison family memories. Thanks, too, for a weekend of walking and partying with your friends and family. (You would have love the Elvi!) And thanks for giving me a reason to run two beautiful hills in a part of the world I have rarely visited.
PS. Sorry for the poor picture-taking quality but I discovered my camera no longer has a picture display.
Share