Tell me about your cycling adventures in Scotland 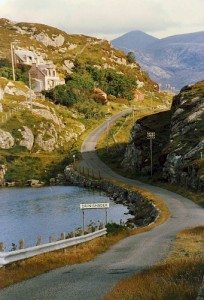 A stunning cycle-friendly road through Drinishader, Harris, Outer Hebrides. Credit: Thanks to nicksarebi's photostream on Flickr for the pic

I was chatting to an old friend (old as in I’ve known him forever, rather than him being that ancient!) yesterday about cycling in Scotland. A couple of years ago he did the LEJOG (Land’s End to John O’Groats) epic on a bike and totally raved about it, especially cycling some of the islands in Scotland. Last night he mentioned that he’d been looking at another two-wheeling adventure. He lives in Northampton and so he planned to take the sleeper train to Inverness.

“If you get off at Edinburgh it’s a very early wake-up call but by heading to Inverness there’s a civilised breakfast on the train before setting off,” said Tall Mark (“tall” because he really is very tall and all other Marks I know are not that tall.)

From Inverness he thought about heading north to Ullapool and then across to the islands on the west coast of Scotland, perhaps starting with the Outer Hebrides. He was then planning to do some island hopping before rejoining the mainland and heading to Fort William to get the sleeper train back south.

I had a similar sort of trip some years ago. But I started at Fort Augustus, headed to Oban, then across to South Uist and north through the Outer Hebs before catching the ferry from Lewis to Ullapool and cycling back to Fort Augustus. Scotland really does offer some fantastic cycling routes.

And so, I got to thinking that it would be great to ask readers of this blog (and anyone they know) to tell me of their epic (and not so epic) cycle adventures in Scotland. I’d say the outings should be more than a few days but you do not have to be a high-speed cyclist. You just need to have enjoyed a great cycle in Scotland somewhere.