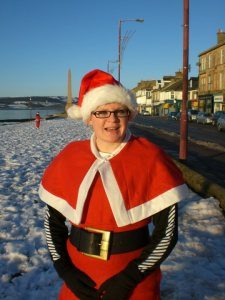 My guest blogger today is Leigh of cycle blog Filles-a-Velo. I met her via Twittersville. This weekend Leigh dressed up as Mrs Claus to take part in her first ever Santa Dash. The Helensburgh event is just one of a host of Christmas themed running events that take place across the country at this time of year. To find out more see Run Urban events listings.

Please not: This blog contains info about Santa Claus that may not be recommended reading for “believers”!

Leigh writes: “I used to be a seasoned runner. That was before repeated injury and a fractured ankle forced an extended lay off. But now I’m back to being kind-of-running-fit and so I thought I’d give a Santa Dash a go. More to the point, I was keen to offer bit of charity cheer and especially for the Helensburgh Santa Dash, which raise funds for the Helensburgh branch of the RNLI. As an ex-member of the Royal Navy and a wife of a serving member, I have a healthy respect for the RNLI and the work they do.

“Sadly, nothing is ever simple in my life and this event was no exception. During the week before the run, Mother Nature had decided to dump a load of snow on the town so the Santa Dash had a very realistic feel, although, of course, it was absolutely freezing.

“The dash became more of a fast walk and slip on ice, with Bambi legs an optional extra on some parts of the footpath. Nonetheless it was a very well organised event, with lots of volunteers, including marshalls, police, HM coastguard, and RNLI members, to assist in the safety of all the participants 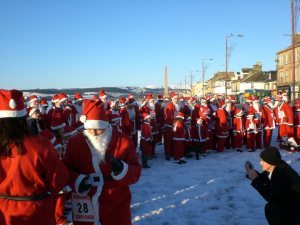 A host of Santas at the Helensburgh Santa Dash 2010

“Despite the cold, snow and ice, it was a stunning morning.  With the sun splitting the sky and reflecting off the snow on the hills, it really set the scene in the most spectacular way. But I don’t think that all the Mr and Mrs Claus were quite as adept at walking/running in snow as presumably the real Santa must be.

“However, for a novice  Mrs Santa I think I did pretty well and made it through the snow and ice to cross the finish line. I really enjoyed the event – and the post-dash treat of  a cinnamon latte and muffin. A reward for good behaviour, naturally!