The fine art of running in the snow 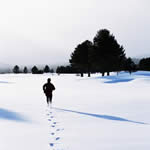 This week I have enjoyed running. I normally “quite like” running if my head is in the right place, but I’ve absolutely loved the exhilaration of running in the snow. On Saturday, when the snow first arrived I headed out to Mugdock Park, Milngavie, a for a truly spirit-lifting run on mostly virgin snow. The sky was blue, the air was still and the views all around were stunning. I even felt myself grinning to myself as I jogged along.

Sunday was given over to sledging with Little Miss Outdoors (a great workout in itself!) and then on Monday I found a spare half hour for another run in the snow. Tuesday I ran to the Glasgow Tri Club swimming session at Maryhill, Glasgow. And this morning I met 1M of the 3Ms for a chatty run through the early morning – and very snowy – streets.

Strangely, while many others have hung up their trainers  I have found myself keen to get out for a run in the snow. I’m enjoying the challenge of running on an uneven and unpredictable surface; I’m loving the bright and clear days; and I’m thrilled by  the magnificent views. Even the dullest parts of my suburb look pretty because of the covering of snow.

Perhaps, though, you’re wondering how I’ve been managing to run in the snow? To be honest, it’s not easy and there are times when I’ve had to slow to a pedestrian-style jog because of ice or deep slush but thanks to my off-road trainers my outings have been pretty successful.

Saturday’s run through Mugdock was aided by a pair of sturdy and studded Inov-8 Mudclaw 333. I bought these at the end of the winter last year and had not had the chance try them out (they are best used on very muddy – and snowy! – terrain) so the first deep snow of this season was the ideal opportunity to take them for a run.

I was really impressed by how well the studs gripped the snow, even on steep uphills and most impressively while running downhill. The trainers do not have much cushioning and so they are not forgiving on harder trails or tarmac but when the snow is deep (or the mud is very muddy) then they’re a dream. 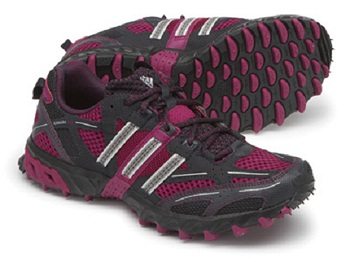 When running at other times on snowy pavements I have been using my Adidas Kanidia TR Trail shoes. These are the comfiest off-road trainers I’ve ever worn and the studs are reasonably grippy, too. They have certainly done the job  while running on snowy streets and lanes recently.

Last year, I reviewed a clever footwear gadget, ice cleats. Popular in countries where snow and ice are more common (although I think this might now be the case for the UK too given the last two winters), many people add ice cleats to their footwear whether office shoes, going out shoes or running shoes. The cleats, available from BlackToe,  offer good grip on ice and there is no doubt that when the current snow turns to treacherous ice (as it always does) I’ll be digging these gadget wonders out from under my trainers collection in the wardrobe.

Running on snow, slush and ice is more testing than running on tarmac and offers a great workout.

Try running in deep snow on grassy areas and see just how tiring it is. Because your feet are being continually challenged on snow bumps and dips, you’re also more likely to engage a greater range of muscles, too. Like off-road running, you’ll need to utilise stabilising muscles such as your abs and back. Inner and outer leg muscles will also need to work harder. I’ve noticed that my calves have had a greater workout than normal and my ankles become tired when running for only 20 minutes.

Other running in the snow tips include:

* Wear warm kit. It goes without saying that leggings, breathable long-sleeved tops and possible a windproof outer layer are best for cold weather running. Add a hat and gloves and warm socks to prevent your extremities suffering in freezing temperatures.

* Take your time. It’s better to run slower than to fun fast and fall over. If you’re worried about your fitness then simply run slower and for longer or take in some deep snow of an extra tough workout/intervals.

* Watch out for ice: Layers of snow can hide icy patches so take care if you’re running in areas where the snow has been lying for days.

* If you can’t run.. then walk. Walk uphill or through deep snow for a great workout.

I imagine that the calorie burn is higher when running on snow. Even just a 10 minute run will have benefits – and being outdoors can really lift your mood. Go on, give it a try.

Has anyone else taken a pair of off-road shoes for a run in the snow? Did they work for you? And do you have any suggestions for great running routes in the snow around Glasgow?