New skills and confidence on a mountain bike

I love the idea of mountain biking. And I have enjoyed many trips to Scotland’s fab mountain biking centres including the Scottish Mecca, Glentress, and Kirroughtree, Mabie, Learnie Red Rocks and Laggan Wolftrax. But I’m still an under-confident mountain biker. I like to put my feet down whenever I see a possible slippery situation ahead. I have my hands tightly squeezing the brakes on every downhill section and I often jump out of the saddle to push the bike uphill in case I slip and fall off. In short, I’m a bit of a girlie girl on a mountain bike.

Then, every so often, I hear about people who have been away mountain biking, discovering new off-road routes and generally getting muddy and having fun. And I yearn to be among the MTB crowds, grinning, laughing and speeding up and downhill on off-road routes.

Practice is definitely part of the solution to steadying my nerves and improving my mountain biking technique. But, better still, I have discovered the advantages of learning first hand from one of a growing band of respected and skilful MBLA (Mountain Bike Leadership Awards) tutors. These qualified mountain biking leaders  are trained to provide bespoke courses for the general public, from children through to pensioners, and the number of outdoor providers and tutors now offering this invaluable tuition is fast increasing.

There are currently more than 300 MBLA courses held across the UK every year by almost 60 qualified tutors. It was at  Scotland’s National Outdoor Training Centre Glenmore Lodge (located near Aviemore), that I met MBLA tutor Jon. He quickly understood exactly what I could and couldn’t do on a bike. (Basically I can ride forwards but not over, under or around very much!) He assessed my confidence levels, ensured I was kitted out in the right safety equipment and then made sure we were outdoors enjoying the cycling rather than sitting indoors theorising. “It is about practice on the bike,” he said. “But it’s also about knowing how to best handle a bike, how to stop, start, take corners, go slowly, speed up and tackle obstacles. These skills will help with your confidence and then you’ll find your confidence grows naturally.”

The idea behind the MBLA tutor led bike skills courses is to show a range of cyclists, from novice through to intermediate, how to become safer, more skilled and more competent bikers. The sessions can be adapted to suit the ability of the group and are perfect for families. To begin with, participants are taught a set of biking skills to suit their experience and desires. This is then followed by a guided mountain biking ride on a route  suited to the group’s abilities.

In just an hour or so of tutoring among many useful tips I learned:

* Hop up and down and over various obstacles

The session was fun, relaxed and extremely useful.

Then came the afternoon’s ride-out. I would normally stick to a waymarked route at a mountain bike centre or at a forest that I know well so it was brilliant to go off-road with a local guide and to discover a wealth of routes that very few people seem to use. The countryside around Aviemore is fantastic for mountain bikers but it’s not alwasy easy to know where to go or whether the route is suitable for one’s abiulity.

Jon knew exactly where we would go and made sure he included some sections of terrain that would test my newly-learned skills. At no point did I feel under pressure to keep up with my MBLA leader. Rather, he let me set the pace. When we arrived at natural obstacles such as river crossings, stones or tree roots Jon first showed me how to tackle them safely. The Glenmore Lodge instructor was also a mine of information about the local wildlife and entertained with details about the surrounding landscape, trees, animals and birds.

I can imagine a family enjoying this sort of biking adventure. Many parents might worry that their children will not enjoy a mountain biking outing but in the safe hands of a MBLA tutor they can be assured that children and adults have the right skills for a ride – and that they will be guided on a route that suits everyone’s abilities and fitness. 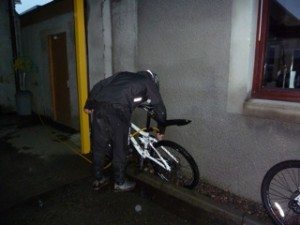 Oh, and don’t imagine that you will be able to get off your bike at the end and simply return it to the hire place or simply throw it in the car. Part of the MBLA guided session includes learning how to best care for your bike. I found out the importance of cleaning, sponging and wiping down my bike as well as oiling the chain etc. While I’m old enough to know all about this vital part of any outdoors adventure (even if I rarely actually clean my own bikes) I doubt my daughter would be so knowledgeable. Having a tutor to tell the kids to get on and clean up their bikes is surely one of the most valuable parts of these tutored sessions.

* Scottish Cycling delivers Trail Cycle Leader (TCL) Courses and Mountain Bike Leader (MBL) Courses through registered MBLA tutors. For anyone with the relvant expereince and who is interested  in becoming a qualified leader or tutor (so that you can then guide cycling groups) check out the Scottish Cycling website or Cycling Scotland.

* Another great Cycling Scotland scheme  for learning about skills and confidence on a bike is Go Mountain Bike.