Could you be the next Scottish female stunt bike star?

Scotland’s top cycle stunt team, The Clan, led by stunt cycling sensation Danny Macaskill, is on the hunt for a new female riding star. The winner will join The Clan as they tour a range of events and schools in Scotland this year. 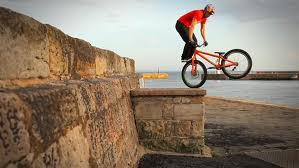 The Clan team was formed four years ago by youtube hit Danny, who has since gone on to become one of the most famous cyclists in the world.

The team have had female members from the start, and indeed the very first, Lynne Aitchison, is judging the competition to find the next female star in stunt cycling. Lynne, who organises the annual women-only Air Maiden mountain biking competition, said: “I’ve been involved in The Clan and promoting stunt cycling for women since 2008. The shows are a great way of showing girls that cycling isn’t just for boys. It’s great for their self-confidence.”

Clan manager Iain Withers says: “Having female riders in the team has always been important to us to make sure we inspire young girls as well as boys into cycling as a fun activity.

“It can be quite a challenge to find female stunt cyclists as relatively few are involved in the extreme side of the sport relative to males. Luckily for us we have had great female role-models involved in the team each year and now we need a new one.”

To enter the competition you must be female, a BMX or mountain bike rider and available from  May 13 until June 3, 2011. The prize includes training, accommodation and food on tour and a £3,000 fee. For an entry form, please contact Clan manager Iain  at iain@mb7.com