I had half hoped that WWW (Wonder Woman Wendy) would cancel on our planned cycle outing on Saturday. According to my Mighty Vickster triathlon coaching plan I had a 3 hr cycle to do. But it was blowing a gale and rainy and, really, I just wanted to hibernate. But WWW – also known as the Gorman-ator… She’s Wendy Gorman and when she told a colleague she was training for an Ironman he said “Go Gorman-ator! – said that she and her partner Cool as a Cucumber Cameron were determined to go for a bike ride. So I thought I’d better go out too. I’d only be cheating myself, afterall. 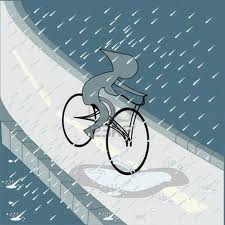 We set off from Balfron and the plan was to head via Fintry, Kippen, Callandar, the Duke’s Pass, Aberfoyle and back. Around 55 miles and a route that wouldn’t normally pose any major issues.

Except, on Saturday, the wind was truly bonkers.

But not at the start! To begin with we were lulled into a false sense of wonderful cycling-ness. With a delightful tailwind (not that I actually realised how strong the tailwind was until we turned into the wind to come home!) the three of us cycled along, chatting, smiling, enjoying some sun (in between the rain) and taking in the lovely views. On sections where we encountered a bit of a headwind we all helped each other along taking a spell at the front and then enjoying a draft.

The scenery was as gorgeous as ever with mountains in the background (Ben Lomond and Ben More) and stunning lochs and rolling fields. Cows, calves, sheep, lambs, birds of prey, herons. All very lovely. 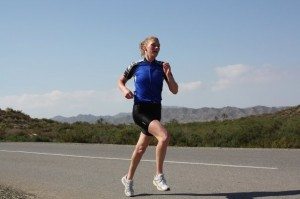 We met some serious head wind along Loch Venachar and then Loch Achray. With little tree or landscape cover the wind swept in from the water and with added sheets of rain we were blasted to bits on our bikes. Cool as a Cucumber started by taking a big spell at the front of WWW and myself but then we each tried to take our turns offering shelter form the front. It was extremely hard going and I would not have liked to be cycling alone.

With 24 miles to go we reached the Duke’s Pass. If you haven’t cycled this Pass, north of Aberfoyle, you’ll have no idea how it goes up and then down a bit and then around a corner and then up and then round another corner and on for a while more and then up again. When I first cycled it a couple of years ago I thought it was a pretty tough and mean kind of hill. Now I quite like it because there are a few downs in between the ups. The wind wasn’t too horrific on Saturday, although the trail of coaches and cars held up just a little by our cycling was frustratingly honky and beepy. Guys, just give us a bit of space and let us cycle on up. It won’t kill you to be five minutes later on arrival and if you just wait nice and patiently you’ve less chance of killing us too.

The descent is fabulous.

Arriving at the bottom of the hill in Aberfoyle I realised I was pretty exhausted. A week of decent training followed by a cycle with just a bit too much wind had left my legs deflated. And still we had the worst to come. The A81. South. It always, always has a head wind. And it always looks so long and tiresome. And it always is so long and tiresome on a bike. Thankfully Cool As had some energy left in his legs (See I told you he was Cool!) and so I managed to have some relief from the wind as I tucked in behind him and pushed my legs to keep up.

Seven or eight miles and I was ready for finishing. Turning off toward Balfron the wind pushed as along pleasantly but I was done in. I’d not eaten enough and I’d cycled a bit too hard. Seeing a little hill at the end I almost wanted to cry. Thankfully it was an ickle tiny hill and before I could cry we were practically back at the door of WWW and Cool As.

I really wish the wind and rain would go away and not come back until next year. Still, it was a good afternoon of training and fun with WWW and Cool As. (Thanks for looking after me!)