Mike Dales is the part-time Membership Development Officer with the Mountaineering Council of Scotland (MCofS) and part-time Access and Environment Officer with the Scottish Canoe Association (SCA). When I heard that he was taking on an awesome week of running in the Cape Wrath Challenge I asked him to give us his account. Here is his guest blog. Prepare yourself for the madness!

Mike writes: Runners like to be in control in the days leading up to a big race.  Even for us midfield runners we try to get our build-up just right – plenty of rest, no excessive exertion, the right food and just the right amount of fluids. 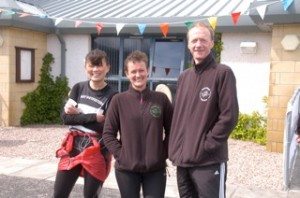 If you’re the type of runner that clings on to that standard preparation for a race then why not break the habit of a lifetime?  Give your legs and lungs a right pummelling by getting yourself up to the far north west of Scotland next May for the Cape Wrath Challenge.

How does the sound of 5 races in 6 days grab you?

The series of races held in mid-May and based around the most north-westerly village on mainland Britain, Durness, have a bit of a Don Whillans’ philosophy about them.  Whillans, the famous Lancastrian climber from the 50s and 60s, liked to tell you that he used the walk-in to a big mountain to get fit.

It’s best to think about the Cape Wrath Challenge races as getting fit, then using that fitness in the big race at the end of the week.  Rather than resting up for the big race on Saturday, at Durness the “challenge” is to run three hard races on Monday, Tuesday and Wednesday, then shift the lactic acids by running a fancy dress race on Thursday before enjoying a rest on Friday, then running a Marathon on Saturday.

Then again, if the weather is on form, which it was in 2009 and 2010, there is plenty of other exercise you can take during the week.  The most northerly Munro, Ben Hope, isn’t far away and there are a number of tempting Corbetts to aim for, and then there are impressive stretches of coastline, so we take the sea kayaks with us.  Despite the gale force winds this year we did manage to paddle Loch Laxford on Tuesday afternoon.

So, you can probably see the race build-up isn’t your normal mix of pasta, taking it easy in the office and 12 hours in your own bed, but, wow, what a holiday!

The racing week gets off to a Monday morning start with a choice of a Half Marathon or 10K, both of which take the scenic north coast road from Loch Eriboll back to the Durness village hall.  Tuesday morning goes off-road with a 5 mile hill race and Wednesday stays mainly off-road with a 10 mile scenic cross-country race around the village.  The north coast scenery makes these three races an absolute joy.  On a clear day you can see Orkney and the more local coastal features like the Whiten Head sea stacks at the north-east corner of Loch Eriboll provide a daily and stunning backdrop to all the races.

After three competitive races, Thursday is a chance to wind down a bit by dressing up as a fireman, mad professor, Dennis the Menace or pile of seaweed for the fancy dress ”target-zero” beach run at Balnakeil Beach – surely one of Scotland’s finest beaches.  The idea of target-zero is to predict your time, then running without a watch, the winner is the person who runs the course nearest to their predicted time.

Guess what?  I won the male prize this year.  Only 14 seconds out.  Woohoo!  A trophy for the cabinet.

The culmination of the week is the Cape Wrath Marathon on Saturday.  This is surely the quirkiest Marathon in Britain.  For a start, those who run the full Marathon have to stop the clock at 22 miles, get in a boat to cross the Kyle of Durness, then re-start the clock and run 4 and a bit miles back to the finish line at the village hall.

However, there are several team options, in that you can run the Marathon as a 2, 3 or even 5 person team.  For the last two years I’ve teamed up with my partner to enter the 2-person team relay.  Whichever category you enter, the route is usually out to the Cape Wrath lighthouse and back, only this year the wind was too strong for the boat to cross the Kyle, so we had to be switched to plan B – an out and back route on the road south towards Rhiconich.  For a plan B, it wasn’t a bad one, but getting out to Cape Wrath should be the highlight of the week, so let’s hope this wind calms down before next May.  Surely it must!

It really is an event for everyone.  Where else would you be running alongside club vests from as far apart as Stornoway and Winchester?  Also, in terms of running ability you are likely to be running with the likes of Ben Livesey from Birchfield Harriers and some elderly runners who may be quite slow, but they absolutely love their running.

If you want to find out more about the Cape Wrath Challenge then take a look at the website.  If you think you can run all week and still have the energy to feast and ceilidh on the Saturday night then get yourself registered.  It really is a great week in a superb corner of Scotland.  The Cape Wrath Challenge 2012 runs from May 13 to 19.  Maybe see you there?!