TOP Ele (Triathlete always to be found On a Podium) can’t resist a challenge. She likes tough triathlons. The tougher the better, it seems.  And so she decided to aim for this year’s Alpe D’Huez Triathlon. This triathlon isn’t of the normal “set” distances of Half Ironman or Ironman. It has its own distances. 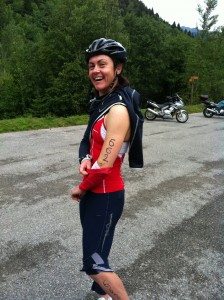 This is TOP Ele’s experience of the event. She was also racing with her partner So, So Strong Seb.

She writes: I’m not sure what prompted me to sign up for this one really except I like to have one race each year that is there just for the challenge. Despite the nickname from some Glasgow Tri Club members as “the goat”, really I am not generally suited to hilly courses so this was probably up there as one of the worst possible race choices I could have made.

I had heard great things about this race becoming one of those must-dos for every triathlete and, combined with a holiday in the French Alps, seeing the tour and eating patisserie, I was in!

So, So Strong Seb in transition 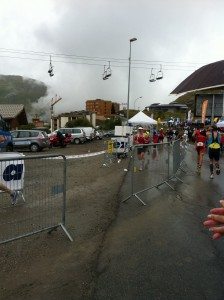 A registration I was immediately impressed with the goody bag. I maintain that I don’t “do” ironman, but this started to feel a bit like one as the goodies included a wee rucksack among other things. Maybe a hint at what was to come, but I generally judge a race by its goody bag so this looked promising.

Also racing was Seb (who hoped to get away with having done no swim training at all).  A last-minute entry came from top Scot triathlete Cat Morrison . Damn, there went my chances of the title, ha ha ha not!

Seb makes it to the run section

The weather forecast didn’t look too bad on race morning, but we were then told it was due to rain all day. Surely not?! Sure, it did!

So for the swim. After 33 mins of drafting some nice French feet in a nice long swim (Seb did not agree about the “nice” bit!), in Transition 1 the rolled-up gilet went straight on my back not my pocket and I was glad I had put the arm warmers on under the wetsuit.

The first half hour of the bike was a TT (time trial) affair down the main road, with a fair bit of free-wheeling to stay out the back of an enormous pack that I did not want to join for far of getting done in.

By half way up the 1hour climb of the Alpe du Grande Serre I felt like 300 blokes had cycled past me. I felt okay but it was somewhat demoralising! Over the top, and I played it safe on the wet hairpin bends with my feardy descending skills before the next (and last) flattish section.

Actually, the second climb, Col D’Ornon, is not too bad – it climbs only very gently until the last bit up. However, by this point, my back was killing me as it did up the Ventoux Triathlon last year and I knew the Alpe itself was going to get very ugly indeed. I treated myself to a wee stop at the top of the Ornon and felt a bit wibbly, and when I clipped back into my pedal, I promptly keeled over on that side, still in full view of the aid station. 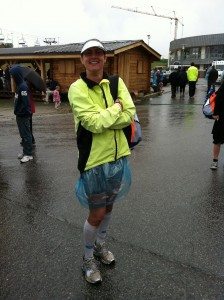 The bike seemed ok so I scurried out of there sharpish and began the precipitous descent. By the bottom, I was freezing and soggy, and the nutrition plan was starting to fail as I opted to keep my claw hands on the bars. Not my best choice.

I thought Seb might have caught me by now so I started worrying he might overcook a bend in an effort to catch me. There really would be no second chance if you went over the edge, is all I am saying!

The Alpe was as bad as I feared. It was nothing like the exhilaration of going up it ahead of the Tour the previous week, and just a battle to keep the back pain to a (barely) tolerable level and the frustration of knowing I was losing so much time. After Dutch corner, I had another stop to ease it off. However, I then started stopping at every km marker until the last few where there were too many British cheerer-on-ers and I kind of wished I did not have Glasgow on my butt or my name on my number so I could just hide.

I was never so glad to complete those 115km and start a half marathon, even if it was also long. My nice dry socks were soon muddy and the glorious view was nowhere to be seen in the fog. I don’t know if the fog was made of treacle, or if it was the altitude that affected me, or I was several calories down, but I moved like a slug on the uphills. Ick.

I was still wondering where Seb was (I later found out he was trying to leave the projectile vomit at the bottom of the Alpe – his nutrition was failing him worse than mine!). Lap one, and I saw Cat running fast but patted myself on the back for achieving goal #2 of starting the run before she had won the race!

I am not sure I have ever finished a run colder than when I started but I was so happy to cross the finish line and instantly don a bin bag to celebrate. Seb arrived a little while later and went straight for a beer in a deckchair in the rain at the finish line!

I’ve just re-read all that and I make it sound horrible. But it’s not really! It’s a great race for testing your mettle and I have learned rather a lot, which just makes me want to go and get fitter and stronger for the next race! My top tips for any would be Alpe-ers are:

* Don’t overload your bike with spares – they’re heavy! I saw some very lean bikes but there’s a balance to be struck I guess.

* Hill climbing is hard – do some hill reps and then do some more.

* Go to The Mighty Vickster’s cycle descending classes. Hairpins+rain would not be so scary then.

* Consider your nutrition carefully and learn how to eat going up and down hills! One gel does not equal one bar, so although I started out fuelling well, it went pete tong later, and at a price.

* Do some off-road running – Mugdock turned out to be a perfect training ground except for the lack of altitude.

You should do this race because:

* The goody bag is great

* You get lots of support on the road at all the villages. Folk cheer you on like they know you, because they can read your name on your number.

* Other than that, go and enjoy the challenge, and the cakes in Bourg D’Oisan the day after taste very good indeed!

For the record, TOP Ele finished in a very impressive  7h55 and So, So Strong Seb in 8h 19mins (despite a spell out of the race to vomit!). These were very good times.