300 days of running. What Jenny Hastings has learned

I met Jenny Hastings on Facebook. I was actually trying to get hold of her rugby star hubbie Scott for a Herald article. (Scott is Scotland’s most capped player. He also played for The British Lions (rugby) and now commentates for Sky, ITV on Rugby.) Jenny also has two very sporty children, Corey, 18, and 15-year-old Kerry-Anne, who she decribes as “truly wonderful”. 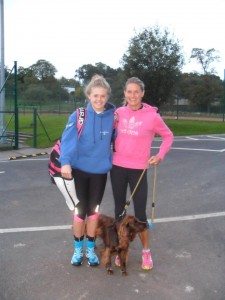 I found Jenny to be so amazingly helpful and friendly and so we became friends on Facebook. I have been following her challenge as she aims to run every day of the year. Recently, she reached 300 days of running.

First, a few questions for Jenny about her year of running

Why did you start this challenge? “I took this challenge up last year. There was a FB site for ‘running every day for 30 mins’. It appealed as  I had been running every day for 10 days prior to the day I found this site in December. I joined it and then it was continued on in January but then a lady from Canada called Riitta posted a site in Feb to encourage folk to keep going on their fitness…I have never looked back.”

Are you raising money for charity? “I didn’t plan to but friends have donated to charity in my name when I reached 100 days, 200 days and 300 days of running. Now I am doing a count down of 50 days – 50 different charities to the lead up to 365 days of jogging.  I asked friends to suggest charities, so I have a few and a few more, that is my charity awareness challenge.”

Have you always been into running? “I was a Breast Stroke Swimmer, an East District Swimmer, competed in Biathlons which is running and swimming under the Modern Pentathlon Association anbd was Scottish Champion for a few years. I ran for Edinburgh Southern Harriers and did get a vest for a Scottish Select for 1,500m Indoors at Kelvinhall but many years ago!. I took up triathlons, trained in the Scottish Squad but along came our wee family.  Eventually I gave up competing. Well, I had my hands full with working full-time, my wee family and a busy husband. I now have a lovely wee doggy Parker who is 3 1/2.”

I also asked Jenny what she has learned from running every day of the year.

1)    I have been able to run for fun, health and wellness without the watch or the clock ticking and wondering how many miles I have run.

2)     The realisation that running can be fun every day, not a chore. Making running part of my daily life has turned this year into an enjoyable and sociable year with our dog.

3)     In the snow and ice I found it easier to run than walk. That seemed very strange.

4)    To believe in myself, that I could run every day even though I was a day of rest girl once a week, or 2 days’ rest if training for 10 days.

5)    Footwear is a very important part of running. I’m not sure I am prepared yet for this year’s winter but I do have my old spikes ready just in case!  Note to self: check out proper running shoes for the winter!

6)    Niggily injuries, respect them. They happen for a reason. I now do core activating exercises, such as squats, lunges etc before running and they have made a huge difference to my knees.

7)    Not to procrastinate in a morning. The sooner I get out with our dog for our run the better. I am also confident now in getting up very early if need be to get the run popped into the day.  The earliest so far has been a 4.30am start but it was well worth it.

8)    My body has adapted. If it’s a 20 minute run one day as I have a niggle then the next day it may be a longer run. We should listen to what our bodies and minds tell us.  If I don’t feel good on a run I just pull back and try to enjoy whatever I can, from stopping to say hello to a friend or smile at a runner, which I don’t think enough runners do ! It doesn’t take a lot to smile.

9)    I am still learning how to let go of my competitive instinct. I’ve not mastered that yet. I still have to be ahead of my husband when jogging!  Never the dog though!

10) Lastly,  I’ve been amazed by the interest, support and encouragement by so many people. This I did not expect.

This has got me thinking Jenny. I might try the run-every-day-for-a-year challenge next year. Will anyone join me?