Sports armband for iPhone to give away!

I have skinny arms. And I hate things to jiggle when I run. So what? Well, I am going to write about a carrier for an iPod music player that actually stays in place and doesn’t annoy me.

On many occasions I have tried running with various MP3 players and iPods strapped into a range of carriers. But I have never been that impressed. I’m not keen on things around my waist, nor do I like to put a music player in a pocket or carry it in my hand. Because I have thin arms, the armband style carriers usually end up somewhere around my elbow. 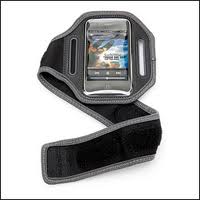 Aha, but now I have found the solution. The nice people at 3 mobiles (I am actually in praise of them twice over because they managed to return my broken mobile phone to me just two days after I sent it…) sent me a Cygnett Action Sports armband for iPhone, iPod touch and iPod classic. Since I don’t own an iPhone, I had to borrow variously the iPhones owned by Little Miss Outdoors and the G-Force (poor me, not owning an iPhone! Sob!).

Although the music wasn’t to my taste (G-Force: Too dance clubby; Little Miss: Too new-fangled and high pitched), the armband was! Made from stretchy and comfy neoprene, the armband stretched nicely around my skinny bicep and was kept in place by a wide and secure velcro fastening. Even when tucked inside the weather resistant armband, it was still possible to use the touch screen (mostly to skip the numerous music tracks that annoyed me!).

The armband stayed where I put it and hardly felt like it was there at all. I did wear it over my long-sleeved top and jacket to run with but inside the house I tried it on my bare bicep and it felt comfy there, too. I ran up and down the stairs a few times to make sure it stayed in place! The cable management (as they write it on the pack) was actually pretty useful and straightforward.

iPhone sports armband to give away

I was sent two of these sports armbands, so I am giving one away. It’s not the most expensive or exciting thing to win but it’s FREE! All you need to do is amuse me by telling me your favourite tune to run to and why. I’ll pick the winner and send out the armband. There aren’t any rules but my decision, as the blog editor, is final and I can’t be bothered arguing. You can enter by commenting on this blog, Facebooking or Tweeting  me. I’ll give you until next Wednesday February 15.