Is it just me or do other sporty girls talk about sweat a lot? Perhaps I do sweat more than the average women. I’ve no idea but I do know that I often find that my armpits and the armpits of my clothes get a bit stinky. This isn’t just my Helly Hansen tops (well known for their stinky pits) but lots of other baselayers and t-shirts, too. 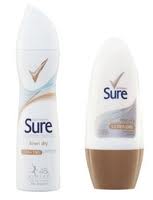 So what was I going to do when setting off for a three day canoeing and wild camping trip? I was just about to accept the inevitable stinky armpits result when a press release popped into my inbox. Sure Women ULTRA dry, it said.

“The deodorant lasts for 48 hours and has motionsense technology, which responds directly to movement giving you long lasting 48 hour protection,” it added.

And it continued: “The formula contains microcapsules that sit on the surface of the skin and as a result of friction in the underarm break when you move, releasing bursts of freshness throughout the day.”

Ideal, I thought. Three days with very little access to a shower plus a lot of sweaty paddling and sleeping wild. I’ll give Sure a try!

Testing the Sure Ultra Dry deodorant

So I added a big burst of the deodorant prior to setting off on the trip. It smelt nice. Really nice, actually. That would be the fresh summer scent called Linen Dry, then!

The deodorant comes in a 250ml bottle and 150ml bottle but even the 150ml would take up too much space in my camping bag so I decided to put the deodorant to the ultimate test!

Not just 48 hours of activity and camping but 72 hours!

I am quite amazed by the results (and I did need to do a sniff test to find out! Yuk!). Normally I would get a bit pongy after 24 hours of paddling and camping  (well, who wouldn’t?) but the sniff test on Night 1 was good. Still that smell of “linen fresh”! (Just about). By Night 2 there was still little in the way of BO. By lunchtime on day three and during a particularly hot period of paddling I did begin to sniff a more unpleasant odour but that could have come from the armpit of my t-shirt.  On closer sniffing my actual armpits smelt kind of ok. They weren’t fresh, but they didn’t pong as much as I’d normally expect.

I am sorry if this blog is a little unsavoury but I like to test my products properly so I can give a good level of feedback.

I can’t say how much of this stuff (“The deodorant… has motionsense technology, which responds directly to movement giving you long lasting 48 hour protection…The formula contains microcapsules that sit on the surface of the skin and as a result of friction in the underarm break when you move, releasing bursts of freshness throughout the day.”) is actually scientifically true but as deodorants go it does pretty much do what it says on the label, keeping me smelling not too bad at all.

Just one thing, though, I have never been a big fan of spray deodorants because of concerns about the damage to the environment but this Sure deodorant did do an impressive job. The deodorant also comes in a roll-on version.