Mark Beaumont’s record-breaking round-the-world cycle in 2007/2008 has prompted something of a “rush” to do the same! Mark told me that when he first thought about the epic bike ride he was stunned to discover that breaking the record seemed “completely achievable”. The previous fastest round-world cycle totalled 276 days.

Mark says: “I thought that it would be achievable for me to cycle for 100 miles each day during the circumnavigation. I reckoned on one day off the bike each fortnight. I predicted that all going well I’d finish in 195 days, and well within the previous record.”

In February 2008, Mark cycled into the world record books having completed the 18,296 miles, through 20 countries, in 194 days and 17 hours, 81 days quicker than the previous record. 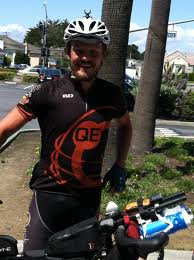 Since then the record has been broken several more times. This week another Brit rode into the world record books. Mike Hall became the fastest person to circumnavigate the globe by bicycle, cycling around the world in just 92 days. He beat the previous record holder by nearly two weeks.

His 24,900-mile journey has seen him ride 18,000 miles through around 20 countries and four continents to raise money for charity Newborn Vietnam. Hall reached the finish line in London on his birthday.

Mike said he planned his journey meticulously so as to have to ride the least distance possible. But he still reckons the record could be broken in 80 days.

Anyone up for attempting the record for cycling the world?!