The Urban Escape Sukai 3 Man Tent, sent to me by Halfords, is just that tent. When the G-Force and I were heading to a “proper” campsite, where we could unload straight from the car to our tent spot, we decided that his tiny, light-as-a-feather tent might be a little too small. It’s great for wild camping for two people, as I said, but when you’re spending more days in one place and have the luxury of being able to carry a heavier tent with you in the car, then we figured we should take advantage. 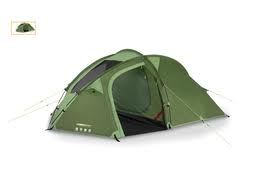 The three-man tent would obviously be great for three people, or, perhaps two adults and a child. But for two people it’s superb. If you had a double blow-up mattress – for ultimate comfort – it would easily fit inside the sleeping area of the tent. We had our Therma-rests, and found we had acres of space for sleeping, as well as space for putting bags, clothing etc. Compared to the G-Force’s two-man in this tent I felt as though I’d moved into a detached house! If there are three or more of you then I’d suggest going for another larger tent in the Urban escape range.

So what does the label say on the Urban Escape Sukai 3 Man Tent:

The Urban Escape Sukai 3 man tent is a spacious double-skin tent, with a large bedroom and a separate living area. It offers more space than the Altai 2, which makes it ideal for a couple wanting more space on a weekend break. With exceptional quality and enhanced features, the tent provides you with the ultimate camping experience.

Double-skinned for greater insulation and reduced condensation, the tent has an attachable rising groundsheet that secures to the internal sides, keeping your tent bug and draught free. Extra ventilation vents reduce condensation and keep the tent cool during warm weather, and the built-in mosquito nets mean no more bites and stings.

Real comfort is key to the Urban Escape range, and the built-in storage pockets provide a home for all your kit. With an electric cable point for easy access to your electric hook-up point, and even a lighting point to hang your lantern, you can be assured of the most comfortable tent you’ve ever had. All Urban Escape tents come with a two-year guarantee against manufacturing faults.

What do I think of the three-man tent?

It’s certainly roomy for sleeping two people, and even three. The living are is more of a porch and if you like you tents have head height for standing up you’ll need something bigger. We did find the porch area was more than big enough for cooking etc. We used a two-burner stove and could sit inside and cook. I like the “window” in the front of the porch/living area that allowed you to look outside at the view whatever the weather.

The structure of the tent was impressive. Although it took us a wee while to work out how to put it up – doesn’t it always – once we got going, it went up pretty quickly. We were located on a windy headland and the tent proved to be sturdy, while others around us seem to flap and fail a bit. I agree that it’s properly waterproof and there was no condensation.

The tent has been thoughtfully designed with good zipping, entrances and doorways. I liked the shape of the bedroom and the living area, although my preference would be for a living area that is slightly larger.

The number of pockets for keeping things safe and handy is impressive. When camping it’s too easy to lose items, such as head torches, cutlery, toothbrushes etc but with so many pockets, the G-Force and I knew exactly where everything was for the whole long weekend camping trip.

Brilliantly, although we were camping on the west coast of Scotland, which can be notorious for the evil midge, the weekend we camped I saw not a single midge. The anti-mosquito net built into the tent looked like it would do a good job of keeping the horror beasties out though.

Taking the tent down was straightforward although we struggled to get it all back into the tent bag. That was until we noticed that a zip on the bag allowed for a big bag extension, which meant we could then easily fit the entire tent and poles etc back in.

I have only a couple of criticisms. The tent pegs are a wee a bit weedy and we managed to bend two within 5 mins of starting to put up the tent. The tent poles are also the annoying variety that stretch and stick while trying to get them out of the tent as you take the tent down. However, the price of the tent at just £69.99 (currently reduced from £119.99 in a £2million Tent Sale) dictates that you can’t have everything. For this price I’d be very happy to buy a couple of new pegs to replace the bent ones and the tent poles were perfectly robust and useful, just a bit annoying when dismantling the tent but for the price they were still good quality.

I would consider buying another larger tent from this Urban Escape range.