I have never been keen on running in a jacket. Mostly I have found running jackets to be noisy (you know that rustling sound that the fabric makes while you run?!) and sweaty. The fit has never quite worked for me either. But I do very much like the new Jack Wolfskin Spiderwind Jacket for women.

I have been testing a few of the new Jack Wolfskin products that will be appearing in shops in 2013. See my other reviews on the Flyweight jacket and the Jack Wolfskin Performance Fleece. 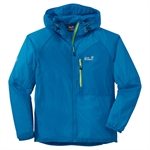 The Jack Wolfskin Spiderwind jacket is made of a “new feather-light and windproof fabric with a silicone-polymer treatment to make it extremely and durably water resistant, whilst ensuring very good breathability”.

Added to this Jack Wolfskin say: “Despite its minimal weight (35g/m²), the Spiderwind fabric remains very resilient because of its mini-ripstop construction. The Spiderwind is a jacket for all eventualities, and particularly suitable for biking, trail running or Nordic walking.”

Apart from the fact that I love the name of the jacket, I was also impressed with it performance. I took it out for run on a very wind and intermittently rainy day. I wore it on over a thin and breathable baselayer and took off into the country. While the weather did its worst around me, the jacket kept me warm and dry. There was no sweat on my skin, even after a 40-minute run and despite rain my baselayer stayed dry. The weather became so bad at one point that I was forced to put up the hood to protect my ears from the wind and the fabric did a great job of blocking the rushing cold air around me. Normally running in a hood would be a total no-no because it is distracting and uncomfortable but the Spiderwind seemed to be almost not there. And I couldn’t hear any rustling sounds from the jacket (although that might have been because of the noise of the wind around me!)

The fit is good, too, and there are designs for both male and female physiques. Although the jacket is super lightweight it has great features such as a drawstring elastic adjustability at the waist and hood , as well as a handy chest pocket for money or keys etc.

I was surprised how robust the fabric actually is. It doesn’t look to be strong because my female version is kind of white see-through but I gave it a bit of a roughing up and it didn’t rip or tear as I thought it would. The jacket folds down into a very small and lightweight ball, which means it will be great for stuffing in a pocket it you’re out running or cycling and can’t tell what the weather will be doing. This is a great jacket for a long-distance trail running or cycling event, because it weighs very little but does a good job of coping with the elements.

You won’t be able to buy this jacket until next year, but I recommend you keep an eye out for it when it does hit the shops and on-line stores.