If ever you want to be held spellbound and wide-eyed for more than two hours, I recommend the Reel Rock UK Tour 2012. On Saturday night, this stunning film tour came to Scotland for the first time and I sat with friends in the Carnegie Hall, Dunfermline, Fife, with my eyebrows firmly raised and my mouth totally dropped. At some points I held my breath in horror. At other times I ooohed with amazement. And on one occasion I gripped hold of my friend’s arm in fright. 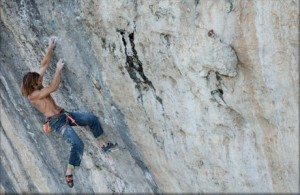 The tour revealed four films to an enthusiastic audience and each film was incredible. Dura, Dura revealed the contrasting stories of two climbers, “older guy” Chris Sharma and new climbing kid on the block Adam Ondra. Both were attempting to solve a climbing problem on a mega route in Catalunya, Spain. The film was fascinating both in the achievements of the climbers, but also because of the different approaches of the two men.

While Chris seemed totally laid back, Adam was wired. Their climbing approaches were very different but both displayed an amazing climbing ability and one that drew in the audience to collectively hope for a first ascent of the challenging route.

The Shark’s Fin was also an amazing film, although for different reasons. It told of legendary alpinist Conrad Anker and his 20-year obsession with The Shark’s Fin, a spectacular unclimbed buttress on the 6,310m Mt Meru in India. Anker had already attempted the Fin and failed when the film joined him again for another attempt. I won’t spoil the film ending for you but suffice to say it was spell binding and riddled with anxiety.

The third film told of two English lads who set out to conquer the strange climbing world of crack climbing in the US. The aim of the Wide Boyz was to tick off a long list of offwidth routes and to aim for the biggie, the notoriously tough Century Crack. The film is funny, intriguing and breath-taking. 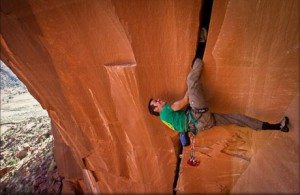 Finally, came the superhero and true bonkers kid of the climbing world, Alex Honnold. I had seen previous films of this solo climber and this time the film revealed how he was coping – or not – with new-found solo climbing fame, as well as his latest challenge to attempt the Yosemite Triple. In under 19 hours, the bold climber sets out to climb Mt Watkins, El Cap and Half Dome, 95% of it without ropes. This film had me holding my breath for minutes at a time.

When Alex is mid-way through climbing his second route without ropes and in darkness and a base jumper suddenly goes flying by I suddenly gripped hold of my friend’s arm!

The Reel Rock UK Tour 2012 continues through October, November and December in Wales and England and is well worth booking. Check out Reel Rock for details.