Last week, I ran my first Parkrun. This Saturday, my guest blogger and friend Debbie was encouraged enough to run her first Parkrun, too. Debbie writes:  Setting out on my first Parkrun, I still harboured vague hopes that competition (or at least running alongside other people) would bring out the best in me. 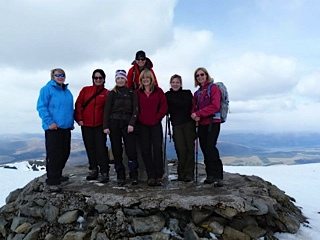 Debbie, second from right, on top of Ben Nevis, her first Munro

Maybe the plodding me of my regular runs was just an illusion and I would turn out to resemble the improbable love child of Paula Radcliffe and Mo Farah.

All the entrants in the Strathclyde Parkrun set off at roughly the same time but soon, as I started to approach the end of the lake, I could see runners on the opposite side of the lake reaching the turning point and starting to head back.

One of them was pushing a baby buggy.

Suddenly, 5k looked to be a very long way indeed.

But having dragged myself out of a warm and comfy bed on a cold and grey morning, I was determined I would make it to the end without walking at any point.

And, some time later, I did just that, even managing to break into what passes for a sprint in my world as I approached the finishing line. My feet were sore and I was still cold despite my exertions but I had made it and I wasn’t last, much to my surprise. I was so elated that I forgot to switch off my sports watch until I had been standing in the timings queue for some time.

The ParkRun website later informed me I finished in 34 minutes and 6 seconds. I wonder if they will still consider my selection bid for Glasgow 2014?

Joking aside, I couldn’t be happier if I had won a gold medal. The Parkrun was an excellent experience, with a flat course, efficient and welcoming volunteers and no sense that, as a novice runner with a veteran’s birth certificate, I was any less welcome than the speedy club athletes. And, for me, it felt like an immense personal achievement.

Just 15 months ago, I was still a 40-a-day smoker of 33 years standing. My chances of running a tenth of the distance I achieved yesterday were zero. I used to get out of breath doing an hour’s Pilates.

Now, I run regularly (thanks to the NHS’s Couch to 5K podcasts) and cycle as often as I can (many thanks to FionaOutdoors, who convinced me I would not be flattened by a bus if I took to two wheels for the first time in 30-odd years).

I get ratty if I miss my Zumba or Body Vive classes. I’ve done my first Munro (Ben Nevis, got to think big), started doing Metafit and cycled from Glasgow to Edinburgh. I still do the Pilates but don’t wheeze alarmingly through the class.

And today, I did my first organised run in my several decades of life. Next up, the women’s 10K in May.

But I think I’ll make it back to the Parkrun before then. And if you’re a novice runner who’s been too scared to take the Parkrun plunge, don’t be. With any luck, you won’t even have to contend with such miserable weather (although this is Scotland).