Guest blog: Going Down Under with a bike

My guest blogger writes about bike touring in Australia: As you would expect for a country the size of Australia, the opportunities for pedal-power enthusiasts are limitless. Boasting stunning natural terrain in addition to purpose-built facilities, Australia has become a haven for cycling and mountain biking, and there are suitable tours for everyone from endurance athletes to casual cruisers. 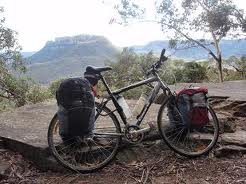 Although arranging flights and organising accommodation with a wealth of equipment may seem like a troublesome experience, it is a lot easier than you think. Despite being on the other side of the world, cheap flights to Australia in 2013 are plentiful.  What’s more, the cost of adding a bike bag to your luggage allowance is usually a reasonable cost, when compared with the flight. Check out some of the airline costs for flying with you bike.

So with this in mind, here is a quick look at what’s on offer and a basic guide to cycling in Australia.

One of Australia’s most beautiful and popular destinations for visitors is the Blue Mountains just outside of Sydney. While tourists can admire the scenery, cyclists have the chance to explore this magnificent terrain.

With a variety of accessible trails, mountain bikers can cruise past cascading waterfalls and fern-filled gullies. Downhill courses and sealed road routes will also be of interest to those looking to make the most of this World Heritage site.

If you prefer to stay on the tarmac, numerous commercial tours are available in and around the major cities. Travellers wanting to see the sights can embark on a half or full-day tour, while diehard racers can pedal from Port Augusta, South Australia, to Karumba, Queensland on a month-long excursion.

In addition to ski resorts such as Thredbo and Mt. Buller that double up as mountain bike facilities in the summer, there are several other exhilarating locations to be found further afield.

On the island of Tasmania, Glenorchy Mountain Bike Park, situated only 15 minutes from the main city of Hobart, is considered the region’s greatest spot with cross-country, dirt jumps and downhill tracks at one’s disposal.

Meanwhile, in Western Australia, Perth is surrounded by a number of exhilarating trails from Lake Leshenaultia for beginners, to the world-class free ride area of South Shore, Dwellingup.

Prepare for the sun

Australian bike tours aren’t like a cool and cloudy ride through the Highlands. Whether cycling for distance or short excursions, you’ll likely contend with warm weather that can test your stamina to the limits. Be prepared by equipping yourself with sufficient sunscreen, sunhats and water receptacles.