Guest blog: Could these be Europe’s top 5 cycling races?

My guest blogger reckons the following “Classics” are the top five cycle races in Europe. She writes:  What these events lack in duration (taking up just one day instead of the weeks that some other tours need), they more than make up for in intensity. Riders of these Classics do not need to leave much in the tank for the following day’s riding so the routes are meant to push the limits.

The Classics does not only cover a number of events, however, but also contains sub-categories that divide the individual events into different segments. One such division is that of the “Monuments”, which are five races deemed to be the oldest and most prestigious events still featuring strongly in the racing calendar. 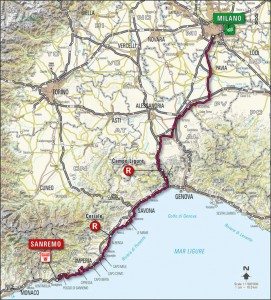 The Milan to San Remo (or La Primavera [The Spring] in its native Italian) is the first proper classic of the year. The mid-March timing also gives the event added bite, with results from the professionals going on to influence their UCI World Ranking for the rest of the season.

The event, which began in 1907, is among the flattest of all the Monuments, although this doesn’t necessarily make it a sprinter’s dream. In fact, for an event so early in the cycling calendar, it is notoriously long at an exhausting 298km. For this reason, renowned sprinters are not always the most successful in Milan, but instead those with superhuman endurance.

Taking place in Flanders, Belgium, the race is one born from a much richer history than many others throughout the season. At the beginning of the 20th century, cycling in Belgium was slowly dying. As riders packed up their bikes and velodromes closed, the once-popular sport fell out of favour. This trend reached its nadir in 1912 when, after becoming the first Belgian to win the Tour de France, Odile Defray brought about a reversal of fortunes. Then, racer-turned-writer Karel van Wijnendaele helped set up Sportwerel’ the very same year, before going on to create what was to become the Tour of Flanders in 1913.

With this, cycling in Belgium had been brought back from the brink and now takes pride of place in the cycle racing calendar.

Arguably the most notorious of the Classics is Paris to Roubaix which amounts to a hellish 260km jaunt through cobbled pathways that have caused their fair share of incident and injury. The Paris to Roubaix attracts competitors from around the world trying to tame the Hell of the North. Those who do make the journey have a 100km stretch of typical riding conditions before the cobbles set in. Not only are they agony on joints and muscles, they are also treacherous in the wet,w hich means that adventure travel insurance is a must-have (try Columbus Direct). Couple this unsteadiness with an undulating, heavily cambered path and you have the recipe for a challenge unlike any other.

Those after a cycling break with added bite may wish to note that Paris to Roubaix is typically run just a week after the Tour of Flanders.

Liege to Bastogne to Liege

The nickname of this 258km jaunt through southern Belgium is La Doyenne or The Oldest. This is because the event dates back to 1892, when it was won by iconic cyclist Leon Houa.

If Milan to San Remo is an endurance race for sprinters, then Liege – Bastogne – Liege is the one for climbers. Not only are the ascents steep, they’re also incredibly long and stretch for kilometres on end. As an added sting in the tail, they are noted to crop up with soul-destroying frequency near the event’s end, when tired muscles are already screaming for rest.

The fact that this has been called the toughest classic, however, rarely puts people off.

The last of the Monuments is the Giro di Lombardia, which is also one of the final UCI World Tour events. Since its inception back in 1905, the race has gone through a total of 12 route changes, with many of these coming over recent years, including a spell between 2009 and 2012 when it was amended four times.

The Giro di Lombardia is another climber’s paradise, with eight serious ascents over the 250km route. The longest of these is the Valcava at 11.8km for an average incline of eight per cent. Arguably more punishing, however, is the Muro di Sormano that, despite only going on for 1.7km, features an average gradient of 17 per cent that rises to a maximum of 25 per cent.

All five of the monuments provide different attractions for different riders. Whether it’s the agonising length of the Milan – San Remo, the apocalyptic cobbles of Paris – Roubaix or the headache-inducing climbs of the Giro di Lombardia – there is something for everyone. With this in mind, there’s certainly every reason to try out at least one. Or for those with a flagrant disregard for their own bodies, a full house of all five.