Sadly, too many of us know of cyclists who have died in road accidents. While cycling is good for the health of the nation, it can also end in tragedy when motor vehicles and cyclists try to use the same roads. Now a campaign called Cycle Law Scotland is calling for stricter liability legislation for motorists involved in bike accidents. 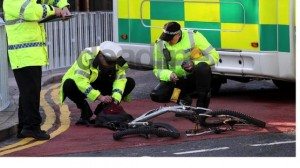 This week, the fast-growing support for Cycle law Scotland was given the backing of Scotland rugby legend Scott Hastings and his wife Jenny. The well-known couple were deeply saddened this summer when two of their friends died in road cycling accidents.

Andrew McMenigall, 47, a coach with Edinburgh Triathletes Club, and Toby Wallace, 36, were killed in a crash on July 2 on the A30 in Cornwall. The pair were taking part in a fundraising charity bike ride from Land’s End to John O’Groats.

Just a fortnight later, Douglas Brown, of Leith, Edinburgh, was hit by a truck as he cycled on the B9080 in West Lothian. The 79-year-old was a founding member of Edinburgh Triathletes.

The bid to change the law

Cycle Law Scotland want a change in the law so that when a crash involves a car or other vehicle and a cyclist or pedestrian, the presume liability will be the motorist, unless they show otherwise.

Scott said: “At the moment, the law is not in the cyclist’s favour. But we think that the liability must be on the driver. Speed is a deadly killer and we all have to be aware of that.

“For Jenny and I, this is all about awareness. All road users need to be far more aware of cyclists who use the road.”

The couple have added their signatures to the growing list of 3,500 signatures already gained by Cycle Law Scotland’s petition. And so have I. Will you sign, too? The hope is that there will be 5,000 signatures by the time the campaign group addresses MSPs at a reception in the Scottish Parliament in early October.

See the petition and sign if you feel you want to.