Friend and local mobile bike mechanic Nick writes about cycling in the South Tyrol. He writes: Taking advantage of our family holiday to Lake Garda in the north of Italy, I travelled a bit further north with my bike for a few days to ride up the Stelvio Pass. The Stelvio is a famous feature of the Giro d’Italia race at the point where the Italian, Swiss and Austrian borders become entangled in a range of 4000m peaks. At 2670m I believe it is the second highest road in Europe.

That trip lived up to all expectations and I made it up all 60 odd hairpins to the summit. What I did notice though, was the fantastic cycling at lower levels in the valleys of this area, and the huge numbers of cycling tourists taking advantage of the splendidly well-integrated infrastructure put in place for their use.

The centre of things is the town of Merano (or Meran.) The ebb and flow of political history has given this region a peculiar split personality. Every village, peak and river has an Italian and an Austrian name and there is a distinct penchant for window box geraniums that leans much more to the Austrian neighbours. Merano is a beautiful 19th century Austrian spa town with wide cobbled streets and elegant whitewashed hotels. The Passer river roars through the centre under arched bridges decorated with yet more geraniums. 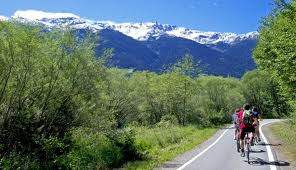 From Merano, there is a regular train up the Venosta (or Vinschgau) valley, which is the main focus for cyclists. The trains are smart and new, with special tall windows so you can look up to the peaks as you travel. Such is the popularity of this cycle route that special trucks are used to carry bikes from the lower stations because the trains haven’t the space, but it all seems to operate like clockwork.

Between Merano and Malles the railway climbs gently for about 70km and runs parallel to a magnificent tarmac cycle track, 4m wide and entirely separate from the main road. At various stations along the route, cyclists disembark and ride back to Merano, which is of course all downhill. Most stations also rent a variety of bikes and many have pretty cafes alongside the path.

Your afternoon can therefore be passed pedalling gently down the valley, never meeting a car and stopping frequently to rest over coffee and cake. In the final few kilometres the route emerges above Merano and drops in elegant loops to the town through sculpture gardens and waterfalls. This is the most civilised of cycling holidays.

I continued my trip from Merano south toward Verona for about 150km down the Adige valley. After this the splendid cycle track journeys the whole way, with the valley widening out and containing more industry and mile after mile of apple trees. After several hours of this totally flat and largely straight route, the monotony was becoming a bit wearing. There is the option here too to jump on the parallel train service and skip as much of it as you wish.

This is only a selection of the cycling opportunities in the area from my experience. I know that there are further links in the network that are not hard to find on the internet. Certainly, Italian railways seem to have understood the needs of cyclists very well and offer a great hassle-free service. Go and try it yourself!