Rod Stewart in concert (but not a lot to do with Scotland outdoors!)

I was at last night’s Rod Stewart concert. It was the first of his Glasgow dates and the first time a concert has been held in the stunning new SSE Hydro arena. While being wowed by the show, the fantastic live screens, the brilliant acoustics and old rocker Rod himself, I squeezed in a wee thought about how to write about this event on my outdoors blog. You see, my blog is generally about all things outdoorsy. 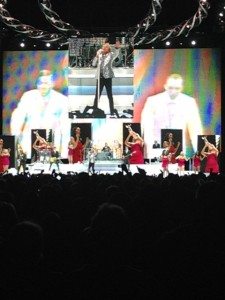 Spurious links between Rod Stewart, the Hydro and the great outdoors:

Back to the Rod Stewart concert night 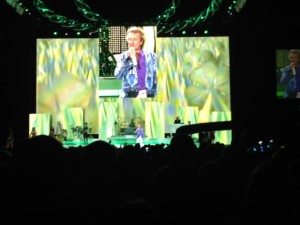 But in reality, there is not a great deal to link the Rod Stewart concert to the outdoors, except that as FionaOutdoors I was there, enjoying the fabulous opening might with the G-Force, Sis Outdoors and her hubby.

Rod might be 68 and perhaps a little too old to sing “Do you think I’m sexy” but he certainly knows how to wow an audience and put on a show that I will remember for many years. (It is strange to think that he is the same age as my dad. And, dad, if you read this, I won’t be able to stop laughing if you ever decide to turn up wearing a tight-fitting gold suit with striped socks and leopard print brothel creepers! That kind of attire can only be pulled off by Rod Stewart!).

Rod’s choice of a mix of oldies and new songs was perfect and I loved them all in a bring-on-the-cheese kind of way.

The backing artists, from a harpist to violinists and saxophonists and two brilliant guitar players added wow factor to the evening, while Rod’s daughter Ruby also came on stage to sing one of her own songs and then partner her dad.

The Hydro has been designed to showcase stars such as Rod and seeing this concert in the singer’s “spiritual home” made for an evening that I couldn’t have enjoyed more.

If you have tickets to see his other shows this week that is good news. If not, I recommend you book tickets to see your favourite acts at The Hydro. How great to have this venue in our city.