“Anyone fancy walking Munros with me on Sunday?” I wrote on Facebook.

“How about the Munro, Beinn Sgulaird, on Thursday night instead?” wrote FB pal and New Dad of Luke.

“Seems like a long drive for a solo Munro on a school night?” I replied.

“Oh, it’s one of my friend’s last Munros and we thought we’d make the most of the weather. We hope to be back by midnight,” ND wrote back.

“I reckon that will be amazing – and on one of the longest days of the year. Count me in,” I wrote.

I have been writing a lot about microadventures lately and a Munro hike after work sounded like the perfect 5pm to 9am adventure. 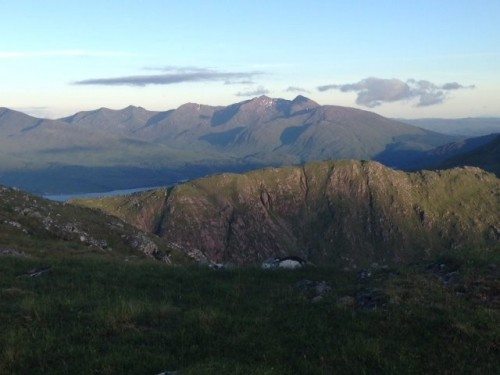 The hike was indeed incredible although not everything went to plan. Here are a few things that I learned walking on a mid-summer night on Beinn Sgulaird.

However optimistic you are about the drive north on the A82 and then west on the A85 it always takes far longer to get to most places in Scotland than planned.

Chatting with a friend, ND, that you haven’t seen for ages and with someone new, Almost Finished Callum, helps the drive time pass quickly.

AFC only has a few Munros left to walk in his first round and, impressively, he can tell you which ones he has walked, in the right order, with the right pronunciation, what the weather was like on the day and who he walked with. Apparently he likes learning lists and was a Scottish chess champion as a youngster.

Time is deceptive on an evening close to the Solstice. It is so light that is never actually feels that late.
Finding the start of the walk to the top of Beinn Sgulaird can be a bit of a puzzle (and a time waster). Eh, AFC?!

A walk on a beautifully clear mid-summer’s evening (and night) in Scotland is utterly spectacular. The best.
Walking and talking isn’t conducive to finding the route. We never did find the “small cairn marking the start of the ascending grassy path towards the ridge”. Instead we walked cross country to gain height and find the ridge.

Walking and talking does make the time whizz by.

My theory to “always add on an hour to the G-Force’s timescales on mountains” proved correct again. During a chat on the phone on the journey west, the G-Force reckoned three hours for the Beinn. AFC had estimated 3hrs 45 mins. On the day it took more than four hours, although some of that was trying to find the start point.

Even when you’re at two-thirds elevation, never imagine that the top is just around the corner. Eh, ND?!
Ben Sgulaird is only 937m tall but it has a great many ups and downs. 1240m to be exact.

AFC is a fast walker and has his energy rating switched to full-on as he approaches his final few Munros. ND and I trailed in his effervescent wake but greatly enjoyed his enthusiasm.

Walk Highlands describes the views from Beinn Sgulaird like this: “On a clear day the 360 degree panorama of mountains, lochs, sea and islands is one of the finest in Scotland”. I couldn’t agree more. With the sun setting the views were even more stunning.

It doesn’t actually get dark on a clear mid-summer’s night, although dull light makes the descent quite tricky.

Best-laid plans are always open to change when walking Munros. A late start and a long detour around the A82, which is currently shut between 10pm and 6am), on the way back home saw the midnight finish being closer to 3am.

There is still life in the legs of this old bird. I am old enough to be the mother of ND and 12 years the senior of AFC but I can still race them up a Munro.

Midges, it seems, can penetrate Salomon Speedcross trainers and Smartwool socks. I have a bite on my big toe.

I am exhausted today after less than four hours of sleep but I feel mentally recharged. I recommend everyone walks a Munro on a clear summer’s evening and night sometime soon.

It is hard to find a more uplifting, soul recharging and energetic pursuit on a school night in mid-summer Scotland.

Finally, a word of thanks to ND who drove us home in the early hours of the morning. I know I would have fallen asleep at the wheel of the car but he did an amazing job (even if his taste in music is so young it’s ridiculous!).

AFC hopes to be a compleatist (the official name for someone who finishes a round of Munros) in the coming weeks. I wish him the best of luck and a great last Munro party.