More than 700 women cyclists took part in the recent Macmillan Cycletta Scotland in Perthshire. Setting out from the grounds of beautiful Scone Palace on a glorious autumnal day, the cyclists completed a range of country routes from 20km to the new 100km course. 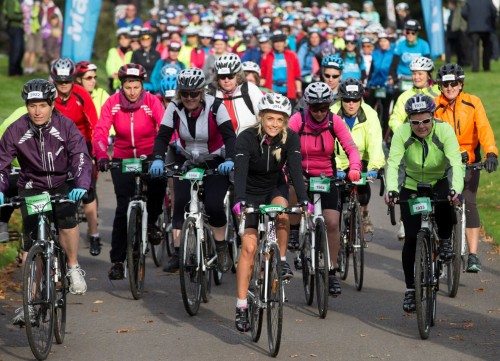 The UK’s leading cycling series for women was led from the front by Commonwealth Games cyclist Charline Joiner, who completed the 100km with the second fastest time in the category with 3hrs 42 minutes and 44 seconds.

The 70km route was led out by Britain’s Number 1 Giant Slalom Skier, Charlie Guest, who took the second top time in the category with a time of 2hr 26min 45secs.

Meanwhile, it was TV presenter Cat Cubie who led the 40km route and also took the top time of 1hr 41min 9secs.

Liz said: “There was a real buzz around the grounds of the palace and it was fantastic to see the second ever Macmillan Cycletta Scotland event get such a great turnout.

“It was a real honour to mark the start of the event and watch everyone spin off into the Perthshire countryside on two wheels.”

Christine Catterson, a member of Glasgow Triathlon Club, was one of the women who took on the new 100km challenge. She finished in just over five hours.

She said: “It was a lovely route on very scenic roads and brilliantly waymarked with coloured arrows. I had no problem following these.

“The course was undulating and there were some tough hills near the end. This reminded me that I should have put in more training before the event.

“However, the atmosphere was really friendly and that kept everyone going and the weather really helped. Although it was cold it remained bright and there seemed to be a tail wind for a lot of the route.

“I would recommend this women-only event to other riders.”

Ladies can check out www.humanrace.co.uk/cycling for details of next year’s event.

Nick Rusling, CEO at event organisers Human Race, said: “We are already in planning for next year’s event and are excited about the future of the Macmillan Cycletta series in Scotland.

“Cycletta is now firmly established as the UK’s leading cycling event for women and we expect sign up for 2015 to be very strong indeed.”