I’m excited to reveal news of a film competition for Women in Mountain Adventure. The British Mountaineering Council (BMC), along with Sheffield Adventure Film Festival (ShAFF), WomenClimb, Sport Is Beautiful and a range of other partners, have set up the contest to find the best films that feature women in the great outdoors. 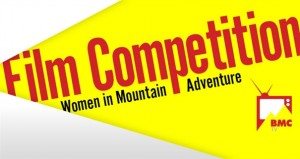 If you visited an adventure film festival you’ll know that adventure films come in all shapes and sizes. Only imagination limits the possibilities of climbing and mountaineering film-making.

Sadly, however, only a fifth of the films screened at ShAFF feature female protagonists, or are made by women.

You can be an amateur or professional film-maker but the film has to be focused on a woman or women. Films about women and filmed by women will be even better. The films will be shown on BMC TV, where viewers can vote for their favourites.

A panel of judges, including BMC vice-president Mina Leslie-Wujastyk, Mark Turnbull (producer of the legendary Hard Grit) and ShAFF director Matt Heason will pick a winner from a viewers’ fabvourtes short list.

There’s £500 up for grabs and the film will be screened at the Sheffield Adventure Film Festival 2015.  The prize also includes free BMC goodies, two weekend ShAFF passes and goodies from sponsors.

The runner up wins £200 plus a bunch of goodies. The film will be screened at events held to coincide with International Women’s Day 2015.

Why has this competition been created?

In the UK, just 5% of sports coverage is of women. The BMC has demonstrated its commitment to getting more people into climbing, mountaineering and walking, and so this competition is a chance to support and encourage women to share their adventures.