Round Arran cycle ride with GTC, 2015 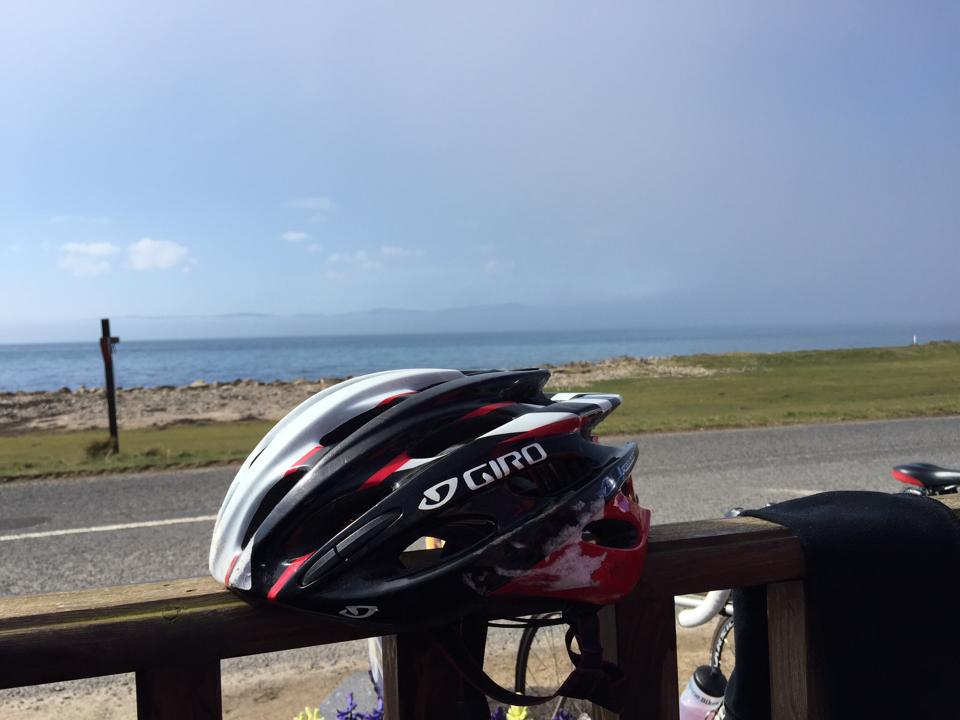 Every time I head to Arran for a day of outdoors fun it’s that 4.40pm CalMac Brodick to Ardrossan ferry that always seems to dominate the last few hours of the adventure. It happened again on Easter Bank Holiday Monday during our annual Glasgow Tri Club Round Arran Cycle.

I have twice before cycled around Arran and once cycled and run the island’s highest peak, Goatfell, all in one day. On one of the bike rides and on the Goatfell run outing that 4.40pm ferry was very nearly missed.

You see, the next ferry after the 4.40pm is the 7.20pm and that means several hours of hanging around in damp and smelly exercise kit and a far later than expected arrival back home in Glasgow. (The ferry takes an hour and the drive from Ardrossan to Glasgow takes almost 1.5 hours.)

I guess if you are planning to get the 7.20pm CalMac ferry it is not a major problem and Arran is a great place to spend an extended day, but for most people a day’s adventure on Arran starts with the 9.45am ferry and ends with the 4.40pm ferry. It’s just how it is. 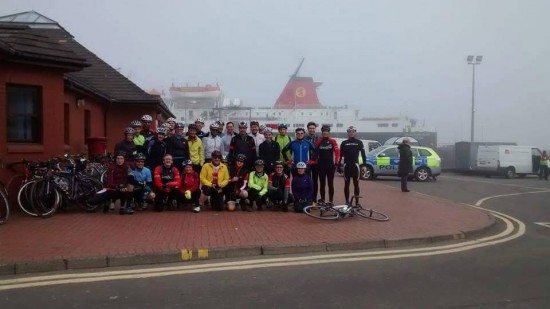 And so we, the GTC crowd, made the same plan for a Round Arran Cycle Ride yesterday. We met at Ardrossan ferry terminal at 9.15-ish. Some had caught the direct train from Glasgow, others had cycled the 30 or so miles from Glasgow to Ardrossan and a few had driven with bikes in the car.

The CalMac ferry leaves at 9.45am and arrives in Brodick at 10.40am. The circuit of Arran is 56 miles. For most of us this is a perfectly reasonable distance to complete in less than six hours.

If riders want to add mileage to the route they can cycle a figure of eight of the island making use of the short but hilly “string” road that cuts the island in two. For those that want to cycle less, the string road can be utilised to complete a circuit of the north or south of the island.

Yesterday, we all agreed on the 56-mile anti-clockwise round Arran ride. We split into groups according to speed and fitness and set out on an almost wind-free day with the promise of sunshine through the low mist. 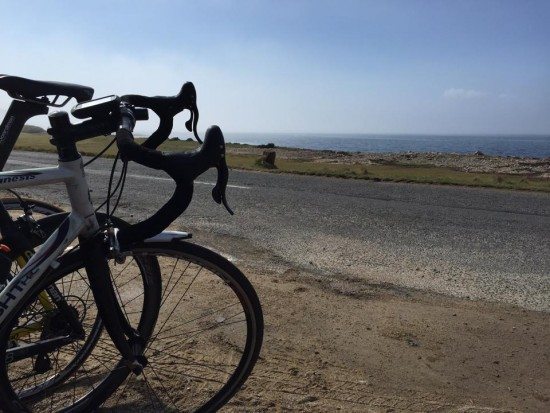 My “middle” speed group enjoyed a wonderfully steady ride, heading north from Brodick along the beautiful east coast. A long, slow climb as we approached the top of the island split us up for a while. The hill is a bit of a slog so early in the ride but the views as we climbed above the low cloud were gorgeous.

After a fabulous whizz downhill and back into the mist we regrouped beside Arran Whisky distillery at the settlement of Lochranza.

(We heard later that ferries from Lochranza to the Mull of Kintyre were cancelled for the day due to thick mist.)

The plan was to meet up for lunch with the faster and less fast groups at Machrie tea room, at the half-way point, and on the western shores of Arran. From Lochranza to Machrie the route is flat-to-rolling and we enjoyed riding along in small groups, chatting among each other. 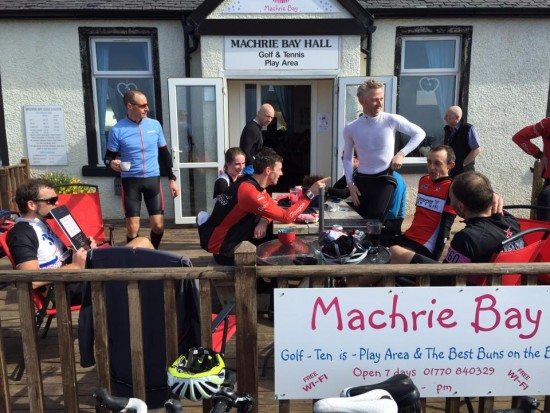 I have been a member of GTC for around a decade but I am not a regular attendee at all the training sessions so it was great to meet new people and find out more about them.

Although the coast was dominated by thick mist, every so often the sun would penetrate and the resulting views of sea to the right and landscape to the left were breath-taking.

A long lunch at Machrie (too long!)

GTC re-grouped at Machrie after around two hours of riding. For some the 28 miles had been completed in far less time, while for others it took a bit longer. But, on average, most of us were speedy enough to expect a fairly steady ride back to Brodick to catch the 4.40pm ferry.

However, things did not quite go to plan. Thirty-one cyclists descending on an already busy bank holiday Monday tea room meant that food would take a while to prepare and serve. While the faster group received their food in good time and were able to set off again with more than enough time to easily reach the ferry, the rest of us had to wait. And wait. 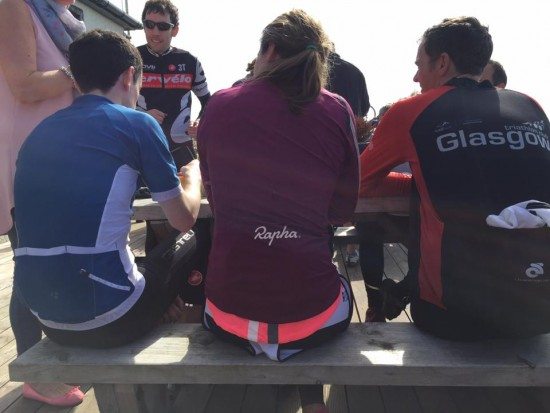 The problem was not the tea room but the number of us riders. A large group of GTC’ers decided to forego lunch and headed off again to allow themselves maximum time for an easier steady ride to Brodick.

Three decided to enjoy a slower lunch stop and take the shorter nine-mile string road back to Brodick. Six of us, including me, voted for lunch (if it ever arrived!) and then a much faster, time-pressed ride back to Brodick. I am hopeless without food for fuelling my mind and muscles.

But I think we may have underestimated the number of hills on the southern end of the island! The final 28 miles was a lot hillier than the first 28 miles and this had to be faced after a morning of cycling.

Our six ended up separating and because I had the ferry ticket of a friend (in the fast group) in my rucksack I knew I needed to push on to make that 4.40pm ferry.

In the end, I enjoyed the challenge of it. I have not been doing a great deal of road cycling since last summer and I needed a way to kickstart my bid for improved cycling fitness. That final 28 miles of the Round Arran Cycle certainly did that. 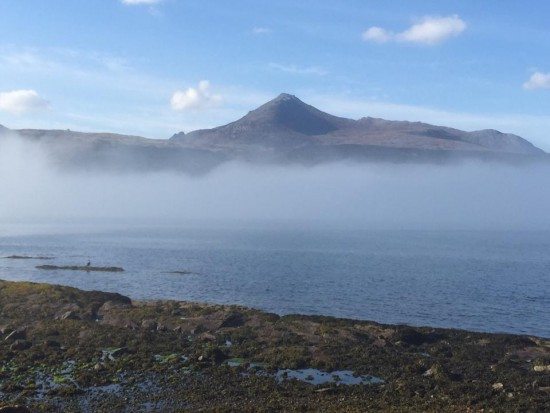 The final push for the ferry

On the uphills I pushed as hard as I dared (and my legs could cope with) and on the downhills and flats I picked up as much speed as my weedy legs could manage.

We passed quite a few other GTC riders who were, by now, suffering from a lack of lunch! I checked to make sure they were okay and they all said they were and seemed resigned to catching the later ferry.

At Kildonan, we scooped up Jamie, a cyclist from Glasgow. He had been planning to recce the Five Ferries Islands Bike Ride but cancelled ferries at Lochranza had forced him to go for an alternative ride (around Arran like us!).

Jamie seemed to enjoy our company and I enjoyed riding in his draft whenever I could! He also told me that he was using the route plan for the Five Ferris adventure from my blog. I was delighted to hear this!

As the hills continued and the minutes flew by my fears rose that we would miss that 4.40pm ferry. It wouldn’t be a disaster but it would mean a very late arrival home.

With 20 minutes to go, we reached the final steep hill out of Lamlash. I confess my thighs were burning with the effort of it all but I could almost smell the diesel of the ferry.

And we made it. We arrived at the ferry terminal with 10 minutes spare. But the rush had been for nothing because the ferry was delayed! Thick mist meant that the ferry from Ardrossan was late and so we had at least another hour to wait until it would then depart Brodick for the return trip. 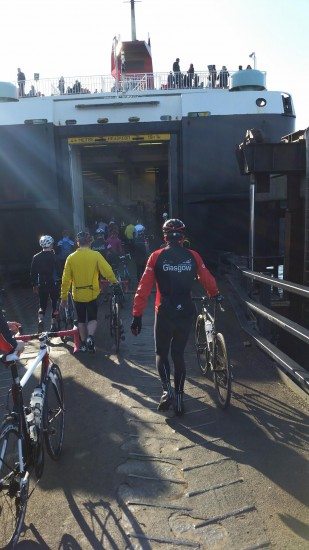 That hour gave all the other delayed cyclists in our larger group the chance to make the ferry, too. It was a brilliant result for everyone and instead of that “blasted” 4.40pm ferry splitting us up for the homeward trip we all enjoyed a happy and upbeat journey together.

Thanks to Scotland’s forever fickle weather – and superb company of fellow GTC’ers – I had a fantastic Around Arran group cycle ride on Easter Bank Holiday Monday. What did you all get up to?