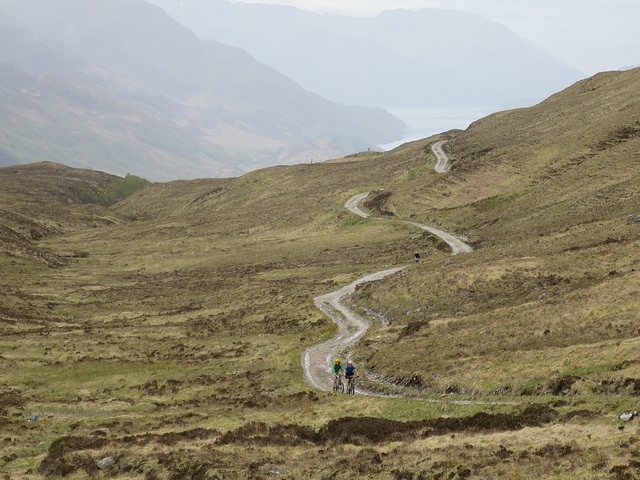 There are cyclists that like to ride for fun, to keep fit and for a bit of a challenge. And there are cyclists who are not satisfied unless the ride is truly epic. In the last week, two tough endurance rides have taken place in Scotland: The off-road Highland Trail 550 and the on-road 3pistes sportive. This year these two events were made far tougher due to Scotland’s winter-summer. Here’s a report from a Highland 550 rider. Read the 3pistes report. The 3pistes took place in gale force conditions and included hail and snow. 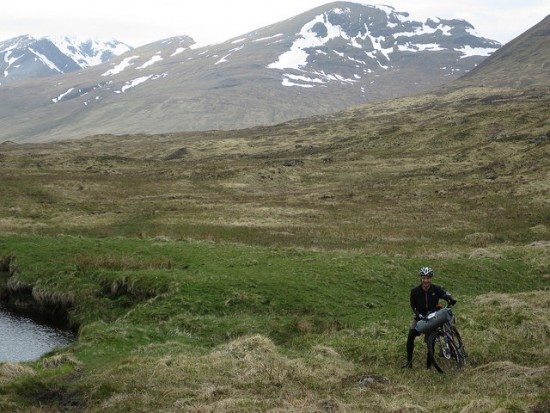 Now in its third year, the HT 550 is a bike-packing event and has something of a cult following among mountain bikers who like their challenges to be very tough. This event is a 550-mile self-supported mountain bike time trail through rugged Highlands landscape.

There is no entry fee, no prize money and definitely no support. It is a self-timed Individual Time Trial (ITT). All that is provided for cyclists is a start list, the concept, a suggested start time, a GPS track file and a list of completion times. Riders must find their own accommodation as they ride the route. There’s a limit of 40 places each year.

On May 23, a field including just three women set out from Tyndrum and headed into a week of awful weather. Markus Stitz, of Edinburgh, was taking part in his second HT 550. He says: “The weather was dreadful most of the time this year. It hardly made it to two digits, there was fresh snow on mountains and no day without rain.

“This was by far the worst conditions since it started in 2013.”

This year, 45 riders joined the group start and six as individual time trials, that is, they started earlier or later than the group. The provisional results show that only 15 finished and one of the ITTs. One rider is still, as I write, out there cycling.

Markus, as well as Alan Goldsmith and Tom Rowntree became the only riders to finish the HT 550 more than once. Tom has now finished in the fastest time two years in a row. The fastest female was Rickie Cotter.

Markus came home 11th this year. He knocked a full day off his 2014 HT550 despite the tough weather and conditions. He is a very experienced mountain biker rider and the inspiration for another multi-day bike packing challenge, the Capital Trail, which starts on June 13 as part of the Edinburgh Festival of Cycling.  This is his day-by-day account: 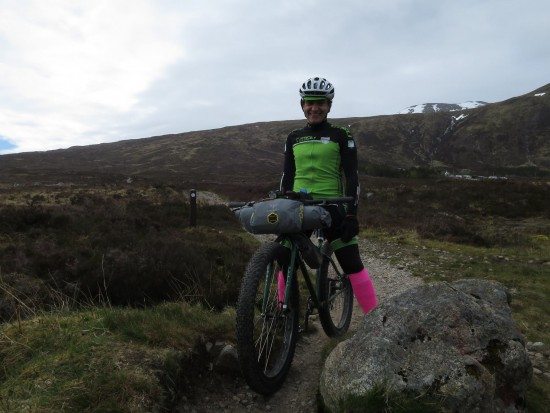 Markus Stitz at the start and in his pink socks.

Day 1: The weather was good and I wore my pink socks to start to show support for Iona, who was the first women to finish last year and has beaten cancer since then.

It only began to cloud over later in the day with rain in time for Corrieyarick Pass. The rain stopped me going over the 770m high pass, although this was frustrating because I wanted to stay with the riders in front.

I realised at the night’s bothy that I had a buckled back wheel. I attempted to straighten it but gave up trying to fix it. 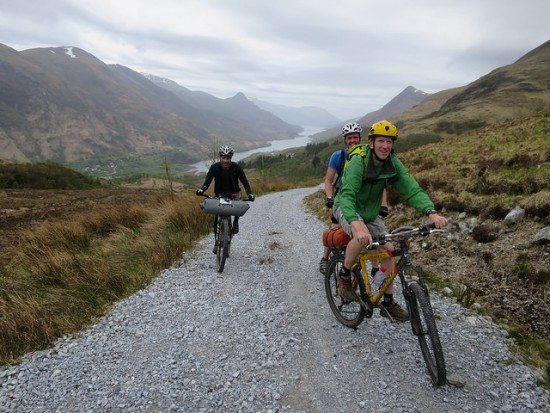 Day 2: This was a day of mixed emotions. I came close to bailing because I didn’t seem to be making any progress, but, in fact, I was. It was such a tough day but it turns out I rode further on this day than I did in 2014.

Perceptions can become confused in tough terrain and difficult weather conditions. I found a nice place to stay but unfortunately it was quite a way off the route and up a big hill. Sleep in a comfortable place is important, however.

Day 3: I made an early start and pulled out all stops to close the gap between me and riders in the main field. I seemed to be flying up the hills. I passed the critical Northern Loop with Glen Golly and Bealach Horn, and carried on to Lochinver to stay in hostel,

I’d ridden 204km and climbed more than 4000m in difficult conditions to regain the rest of the field. And it turns out I rode the same distance on day three of this race as I did over day three and four combined in 2014. 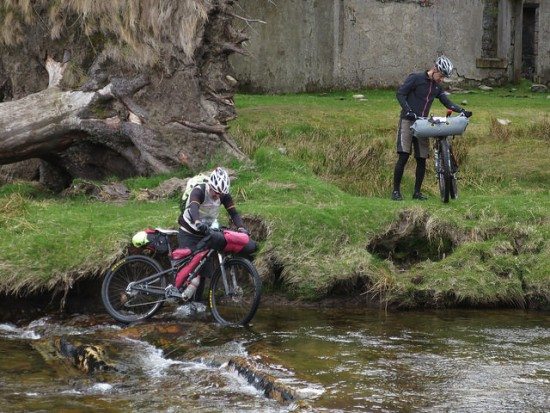 Day 4: I’d missed a section of route on day three because I was tired and so I had to backtrack and cycle that bit. I felt tired from my efforts on day three but this is when things became more sociable.

On the Lochinver Traverse I pushed together with other riders Bryan, Jonathan, Bert and Enrico. The four of us even stopped for lunch at Oykel Bridge and then we all carried on to Ullapool.

Day 5: It was a very early start from Ullapool because I needed to make a crucial river crossing in Fisherfield before the big rain started. I wrecked my brakepads at Dundonnel but carried on and made it through river in time. Even then the water was waist deep but my fatbike floated nicely!

Rider Alan Parkinson gained ground on me while I serviced my bike. However, my thoughts turned to the fantastic section of technical singletrack through the Fisherfield. This is one of the most intimidating and remote locations on the route but the riding was amazing.

I stayed in Kinlochewe in a bunkhouse to warm up after an afternoon of wet, windy and truly awful weather. 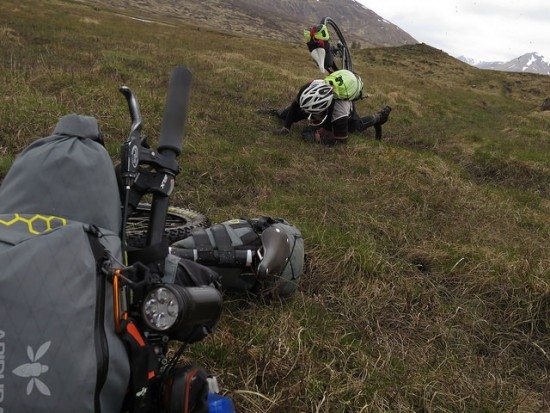 Day 6: The start today towards Torridon and Annat was slightly delayed due to heavy rain and a headwind. The climb to Corrie Lair was very tough but I made it only to be blown off my bike by the gale force winds on the descent. I hurt my arm in the process.

I finally made it to Achnasheen still, amazingly, in good spirits and then rode into Glen Affric. But the conditions decorated again in the evening, with gale force winds, hail and fresh snow. I spent the night in a bothy worrying about the weather the next day. 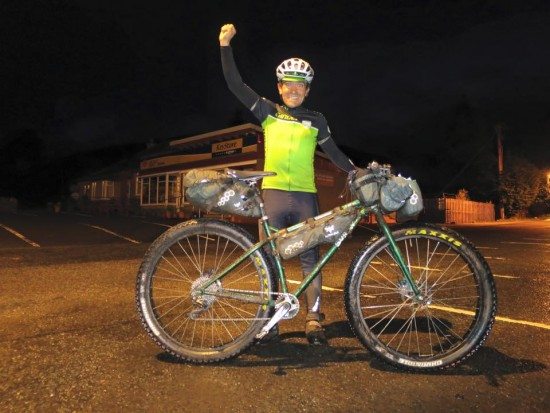 Day 7: After a very wet and cold start I bumped into Enrico who was managing to battle on, too. This was the last day and so I gave it one final push. I knew from 2014 that it is possible to make this section in one day and so I kept going. I pushed all the way through to finish at 1am in Tyndrum. I was totally soaked.

I was super chuffed with my result of 11th place and a day quicker than 2014 but it was the hardest challenge I’ve done so far and in conditions more like winter.

Also read my article about the HT550 2014 at Scotland Outdoors.

Thanks to Markus for the photos. See more at Flickr