Scotland’s summer of 2015 has been almost non-existent. But, last Friday, the sun shone and the temperatures climbed. My friend Lesley and I headed north in Fern the Campervan and drove through some of the best high-rise scenery you can imagine en route to a long-planned Munro bagging weekend.

Loch Lomond, Rannoch Moor, Glencoe, the Great Glen and Loch Ness all looked stunningly glorious as we headed to Loch Mullardoch and the promise of hiking the four remote Mullardoch Munros. We even sat on the loch-side of the Caledonian Canal at Fort Augustus in warm evening sunshine to eat fish and chips. This is a rarity in a normal summer in Scotland, let alone the #SummerOfWinter205. 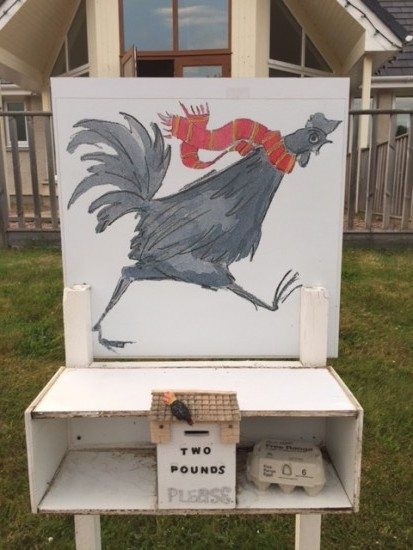 Our overnight accommodation was at Bearnock Hostel, some six miles along the Glen Affric road, close to the village of Cannich, which we reached at about 9.30pm. (A quick note about Bearnock. This relatively new hostel is super clean, modern and welcoming. While the rest of the walking group slept in dorm-style rooms (each with modern en-suites) I stuck to my campervan, yet the owners were very happy for me to park up opposite the hostel and make use of the bathroom facilities for no charge. I would highly recommend this place to stay.)

This Munro bagging weekend had been organised by my Munroaming friend Tansy, in conjunction with Deeside Hillwalking Club. My invitation was gratefully received because a group outing to the Mullardochs is best assisted by a group booking on a boat, which whizzes you along the loch at the start of the long ridge hike and takes a lot of the pain away from a tediously hard walk in (or out) along the shore of the loch. 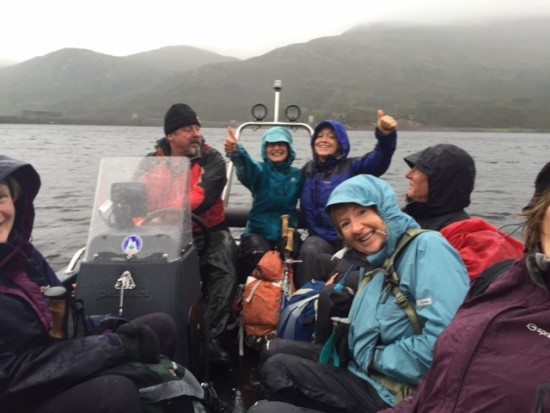 To explain, the four Munros, Carn nan Gobhar, Sgurr na Lapaich, An Riabhachan and An Socach, sit side by side along the northern shore of the loch. You can choose to make a very long walk along the loch shore to reach the furthest away Munro and then walk back along the ridge including the other three Munros. Or you can walk the Munros and then return along the shore. Alternatively, as we did, you can pay a ferryman to replace the shore-side walk with a fast boat ride.

The four Munro hike is still a tough one with more than 1800m of total ascent so we were delighted by ferry boat ride along the An Socach end of the loch. Sadly, we were not so delighted by the weather.

A beautiful Friday evening had been replaced by a cold, wet and windy Saturday morning. (Annoyingly, a very wet Saturday turned into a bright, warm and sunny Sunday.)

However, if you walk the Munros you will be familiar with Scotland’s fickle weather. Even in early July a day on the summits can feel like a winter’s day. 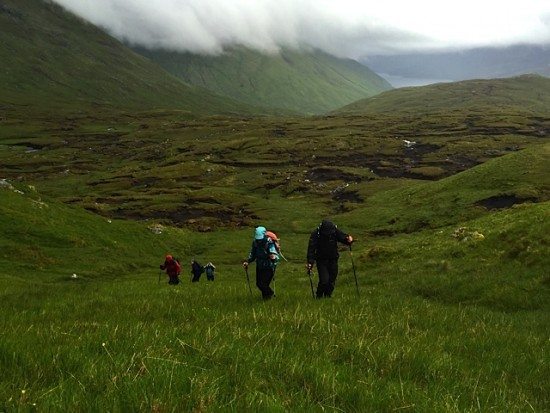 A hike up towards the mist and rain.

A ridge walk in the mist

Thanks to all the organisation and the booked ferry, most of the walking group agreed that we “might as well” give the Munros a try. The walk from the loch-side to reach the lower slopes of An Socach was surprisingly long-winded. Peat bogs and the lack of a trail made the going fairly tough and with increasingly hard rain and stronger winds the doubt began to creep in that we would not complete the four peaks.

I thought to myself that if Tansy, who has a date set to “compleat” her first full round in mid-August, was determined to plod through the awful weather to bag the four Munros then I would too. 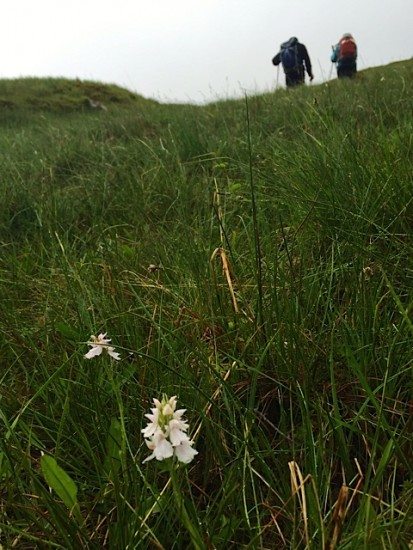 The lower slopes were abundant with Spotted Heath Orchids.

Around a third of the way up the first Munro the wind suddenly picked up and two of the group decided they would prefer to return to the start along the shore side, rather than spend the day being further buffeted on the ridge.

I could see a few more of the group wondering if they should do the same but we all muttered that we would try for the first Munro “at least”. The wind was strong in places and the rain was fairly relentless but we made it to the summit of An Socach (1069m) with a feeling of triumph over adversity. 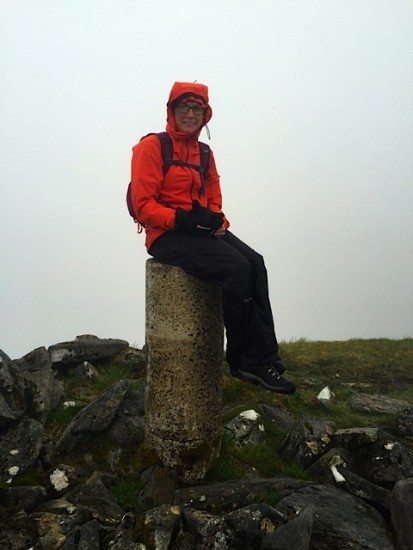 Misty summit of An Socach

No one wanted to hang around so we quickly marched on towards summit two, An Riabhachan. I didn’t feel as though any of the walking throughout the day was particularly hard. Of course, there was a fair amount of descent and ascent and three of the Munros were located at quite a distance along a ridge, which, at times, was a little scrambly and precipitous, but the hiking itself felt well within my capabilities. There was also a well-trodden path to follow along most of the top of the ridge. 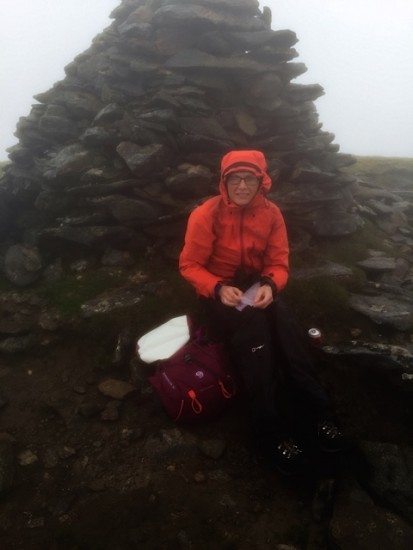 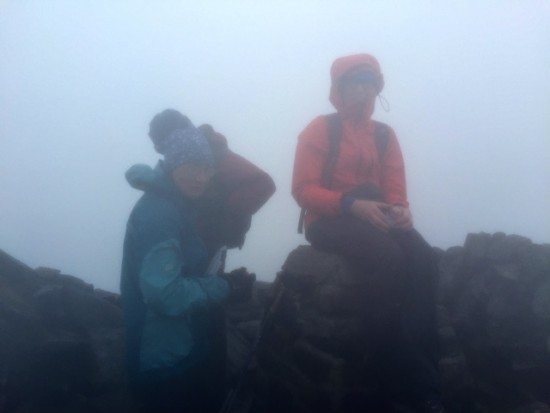 What made the hike so arduous was the time on the mountains (nine hours), the rain (at times very heavy and straight into our faces), the wind (occasionally ferocious) and the mist, which made navigation by map and compass essential. The wet made us cold and I was relieved that I’d packed so many spare layers, a lightweight down jacket and my amazing Berghaus hydrodown mitts. Yet again I was thankful that the hydrodown technology had been invented and could keep my hands warm even when the gloves were thoroughly soaked.

After reaching the top of An Riabhachan (1127m) I was fairly sure we would manage all four peaks that day. Tansy, Ruth and Geoff were also convinced while Lesley and Moira decided they would head back to the car after Munro three, Sgurr na Lapaich. Moira had walked the fourth Munro, Carn nan Gobhar, on another occasion and she decided she had, had enough of the hiking upwards. 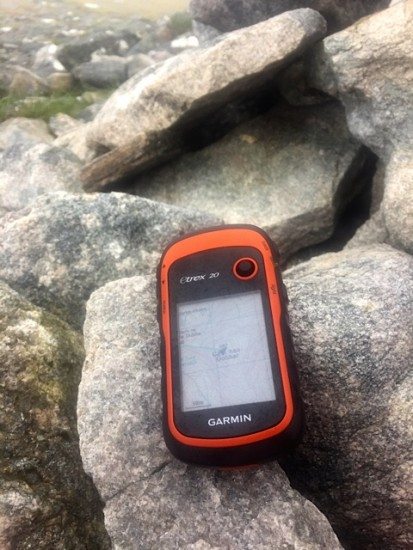 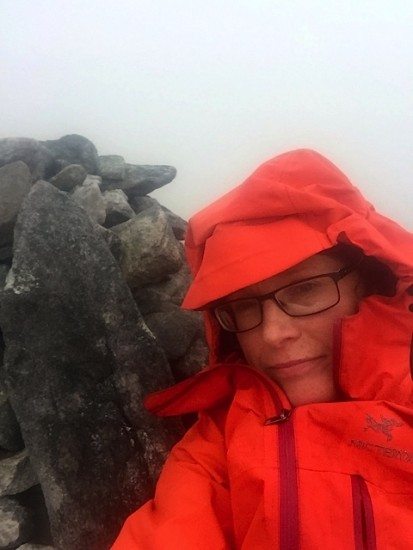 As we ticked off the Munro summits and the weather finally decided to be a little kinder, our spirits soared. The chat that had previously been silenced by the grim conditions picked up again and I can honestly say I enjoyed walking through the clouds on Munro three and four.

By the time we were descending Carn nan Gobhar (992m), the clouds started to give way to sunshine. The views over the glen and Loch Mallardoch were splendid. I think they were made all the more magnificent because we had spent the day shrouded by cloud and mist. 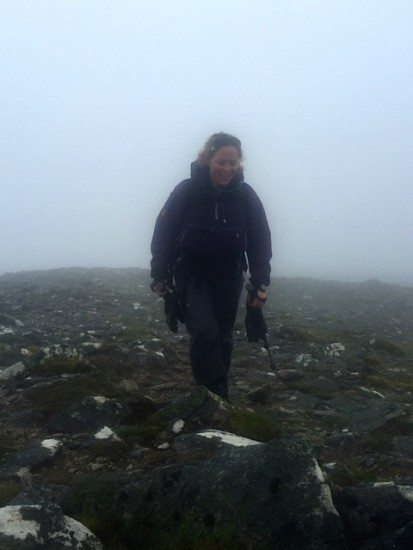 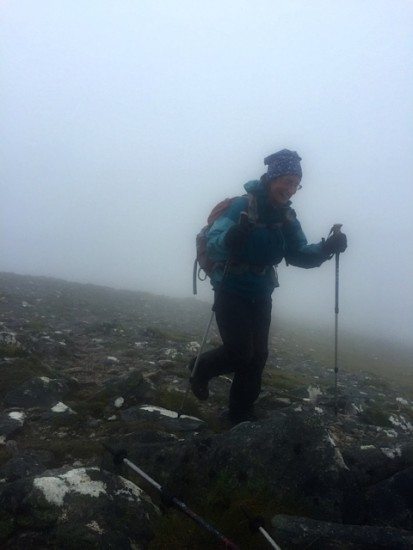 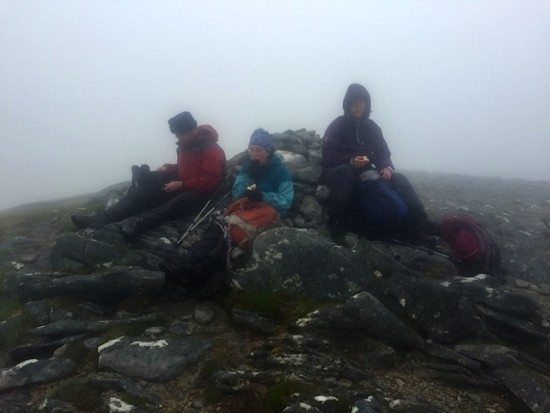 It was frustrating that the day’s weather ended up clearing into a beautiful sunny evening but only because I kept thinking: “Oh, wouldn’t it have been awesome to have walked the ridge in stunning conditions.” on the whole I was very pleased that we had risen to the challenge and pushed ourselves to bag all four Munros, despite the horrible conditions. 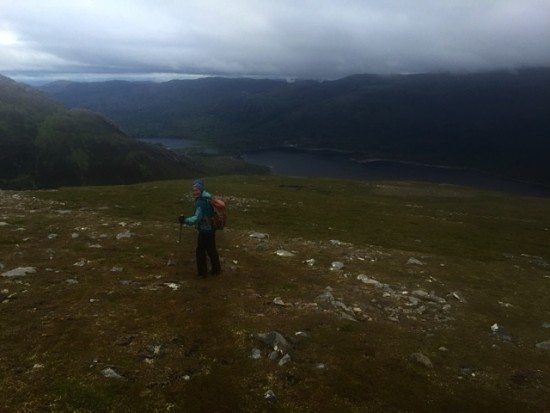 The weather starts to brighten on the long final descent.

I also took heart in a few other highlights:

The weather starts to brighten on the long final descent. 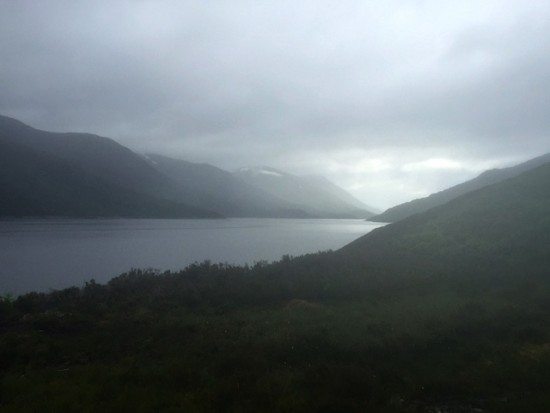 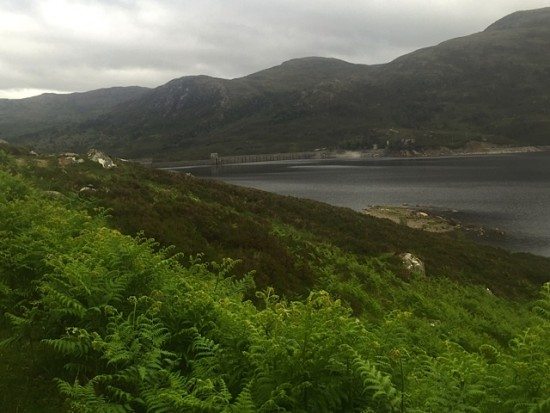