27 things I learned on a Jack Wolfskin press trip

Very, very happy to be down off Maud's Garden climb.

In no particular order, these are some of the things I discovered during a Jack Wolfskin product testing trip in the Peak District.

High up on Maud’s Garden, The Roaches.

I should love climbing. It has all the ingredients I enjoy, such as fresh air, challenge, physical ability, fitness and daring. But I not good with heights. I am better than I once was but I am still not good. The Jack Wolfskin press event included some stunning  climbing at The Roaches, near Leek. I recommend it for all levels of climbers, even the scaredy cats like me.

Trying out some of the kit at The Roaches.

People believe that because you are invited on a special trip with give-aways of free kit that you will only say nice things about the products. But this is not the case. The Jack Wolfskin representatives were keen to hear the opinions of outdoors bloggers and journalists, including our first impressions of their new winter collection of clothing. They want us to go away and test them and to report back on the good – and the bad. 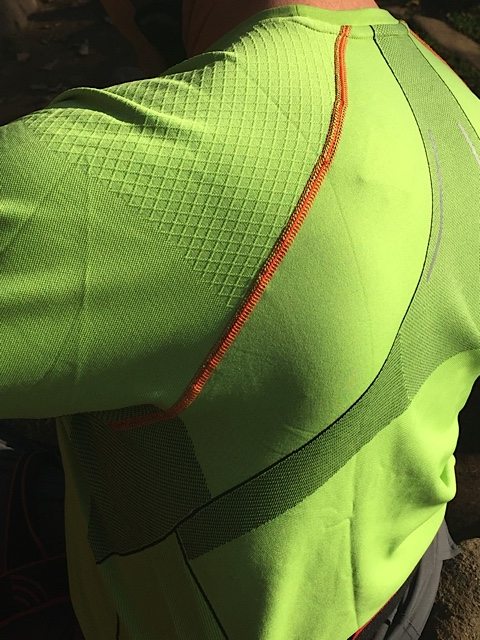 All in the detail: New Jack Wolfskin winter baselayers.

Jack Wolfskin want honest reviews. Obviously, JW want bloggers to spread the word about their great kit. But they also believe, like most of the outdoors clothing brands, that honest reviews are far better and more convincing than fake we-simply-love-you-because-you-sent-me-free-kit reviews.

Jack Wolfskin was founded in Germany in 1981. The name Jack Wolfskin originates from when the founder visited Canada, where he saw the name “Wolfskin”. He combined this with  more ordinary name “Jack”, which also relates to Jack London, the author of adventure novels Call of the Wild and White Fang. In addition, wolf is a symbol of a life of independence and freedom.

Abseil off Maud’s Garden. The baselayer enjoyed a testing when I found that being scared on a climb makes you sweat. A lot!

There are some great looking Jack Wolfskin products in the winter collection and I am looking forward to testing a few of them. They include interesting features that are either new, or I have not heard about before.

New for winter 2015 is Jack Wolfskin Downfiber. This combines their hybrid insulation, Jack Wolfskin Fibre Cloud, with down on a 70:30 ratio. It’s a mix of water repellent down with a lofted synthetic insulation for “the best of both worlds” because the down offers warmth and also there’s the water resistance of the Fibercloud.

Jack Wolfskin, like many other brands, also talk about “body mapping”. So they design clothes to have more insulation where you might need it in cold weather, such as the heart area, and less insulation where you sweat the most, such as under the arms and the back. The aim is a more comfortable outdoors activity experience.

The new TROPOSPHERE O2 jacket includes Fibre Cloud insulation and body mapping, as well as a new soft-feel waterproof outer fabric. I am interested to see if the fabric is as waterproof as it’s claimed to be. 20,000mm.

Jack Wolfskin have created new pit zips that open in a different – and, apparently, better – direction. 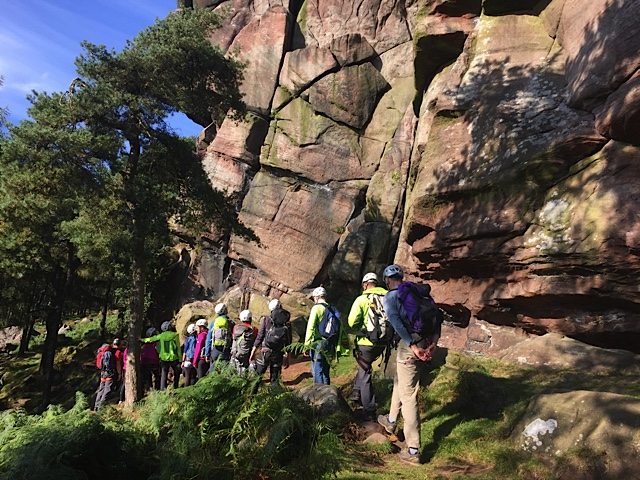 Bright green softshells for the guys and deep pink for the girls.

There are some new and, in my opinion, beautiful looking softshell jackets, including the Nucleon Stormlock jacket and the Proton jacket .

Jack Wolfskin are particularly excited about their new 3-in-1 pants. Having realised that 3-in-1 jackets sell very well for them they have launched two pairs of 3-in-1 pants. One pair is for active wear in the mountains while the other is more specifically for skiing. The pants have a weather-proofed outer and an insulated inner. I am keen to try these, although I am not sure they will prove useful for me.

It was suggested than the inner insulated trousers would be perfect as camping pyjamas.

The best weather for this press event, so we could test the products, would have been wet and cold. However, against all the odds, it was sunny and warm at our Peak District location earlier this week.

The Peak District is beautiful. The event was held near Leek. It’s a place I had not visited before and I thought it was stunning. No doubt this was helped by the beautiful sunny weather.

There is a cafe hidden behind the trees and set into the rocks at The Roaches. (So I was told.)

The Peak District has midges! I was amazed to see them at our climbing spot at The Roaches. However, they do not seem as bitey or feisty as our Scottish midges.

Keeping me safe on Maud’s garden. 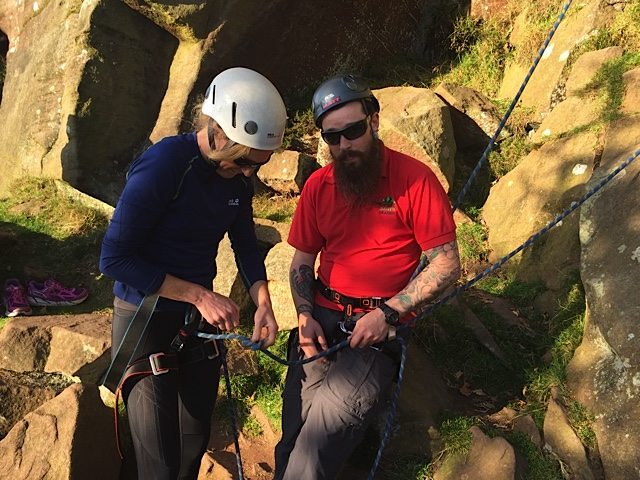 Checking my knot tying before I climb.

If you want to try a range of routes to suit your ability and you are unsure about climbing try Peak Pursuits. They have some great instructors.

Maud’s Garden is more than 20 metres and I climbed the easiest route I could find. The shuffle around the chimney section at the top was quite tricky and the last section, climbing out on to the front of the chimney felt daunting. It was good to abseil off. 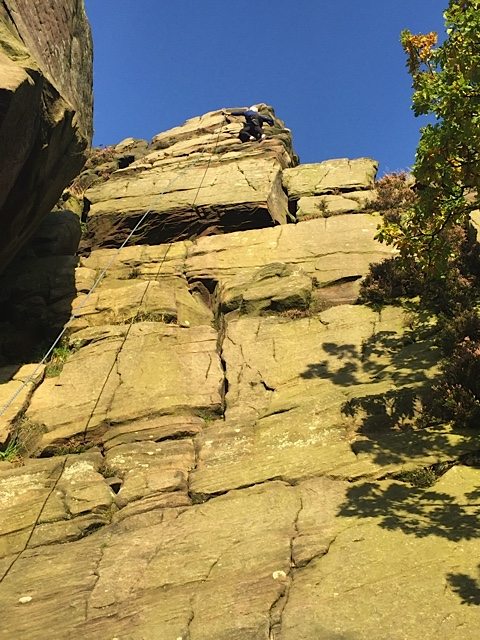 On the chimney of Maud’s Garden.

Apparently, there are wallabies roaming around The Roaches, although we didn’t see any. 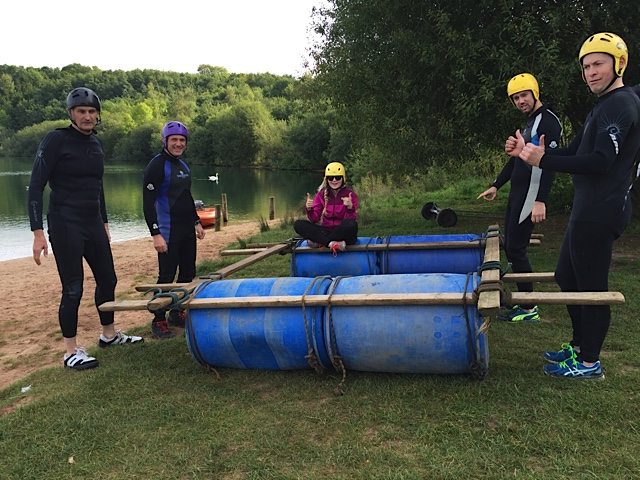 Raft building, another activity that we tried during the Peak District trip, seems like a fairly non-competitive activity but in the end most outdoorsy people are super competitive. We competed fairly fiercely but with good humour at each stage. Again Peak Pursuits helped us to enjoy a good outdoors activity. 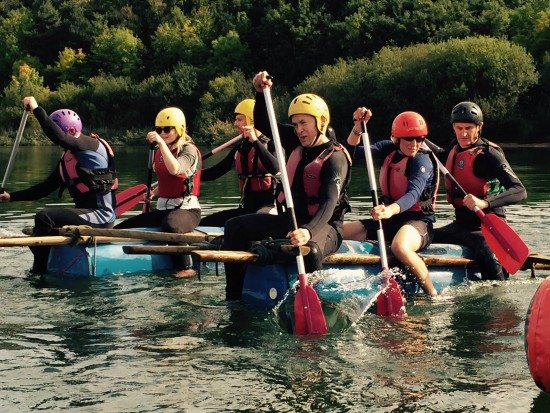 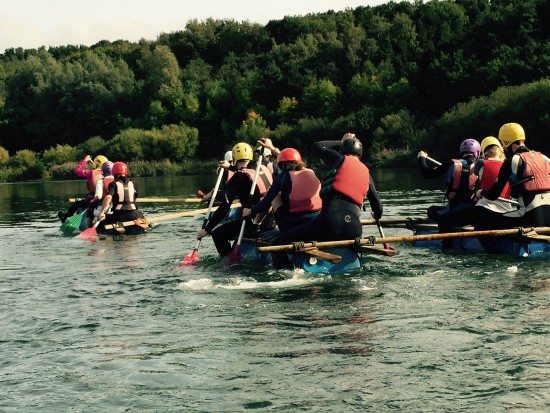 I was once a young chickster blogger. Now I am an old bird blogger. (Compared to many of the other females on our JW trip). I don’t mind and it’s great to see such an enthusiasm for the great outdoors and blogging.

Some men compete in beard competitions. We found this out thanks to our Peak Pursuits climbing instructor who does indeed have a long beard and does compete with his beard!

While I love bright colours in outdoors clothing, others much prefer blacks and darker hues. I loved the bright colours of the softshell jackets for men and women but I am not so keen on the black TROPOSPHERE O2 jacket. However, other women in the group said they really liked it because they could wear it around town and to work.

However, their new Rock Surfer backpack (18.5l) doesn’t fit me very well around the waist. It includes a new Velcro stretchy waist strap that is miles too big for me.

Meeting up with a group of like-minded outdoors journos and bloggers has once again proved to be a great thing to do. 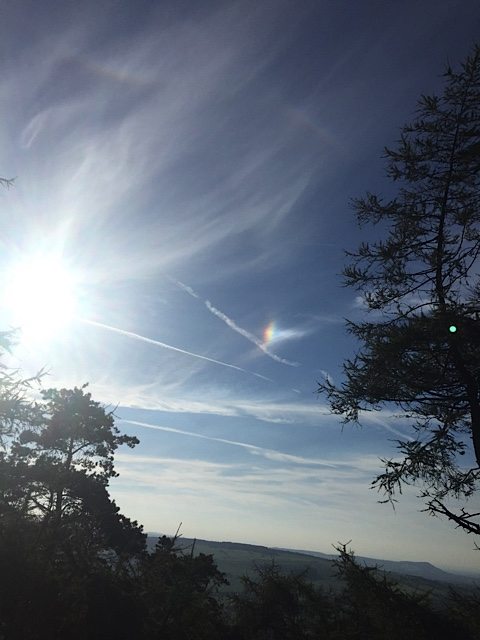 An Indian summer in England.

The Barns at Alderlee, Meerbrook, Leek, is a great place to stay if you are looking at this area. It’s self-catering and clean and would suit large groups.

The Lazy Trout Pub at Meerbrook lives up to its excellent TripAdvisor ratings. The venison was superb.

Look out for my kit Jack Wolfskin reviews as I test the products this winter.