Possibly my worst day of cycling ever 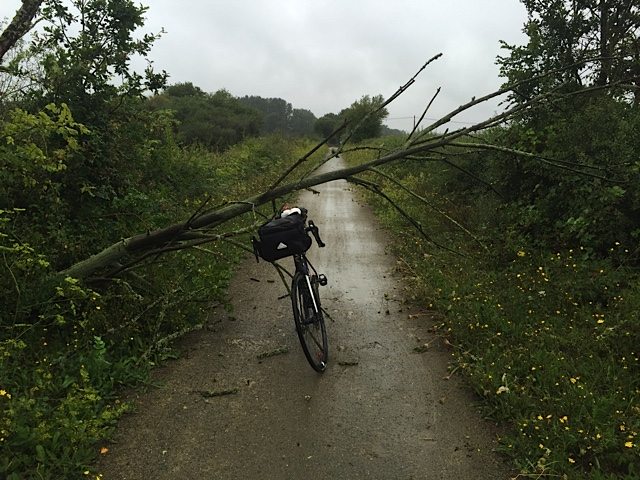 It rained but not the normal on-off rain. This was non-stop monsoon style rain like I have never cycled in before.

It was cold. Not summer in France cold but Scottish cold that got into my bones and left my hands and feet numb.

It was long. The day’s mileage that I had estimated via websites and Google maps was short by at least 25 miles. Or maybe more.

The terrain was flat but much of the day – hour after uncomprehending hour – was spent on a wet and gritty former railway line.

And this wasn’t any old grit but the kind that feels like glass and is meant to be super heard-wearing. I spent every minute of every hour agonising over the damage it was doing to the components and paintwork of my new bike.

This was the penultimate day of a two week solo cycle tour around various departments of northern France and I questioned what on earth I was doing. 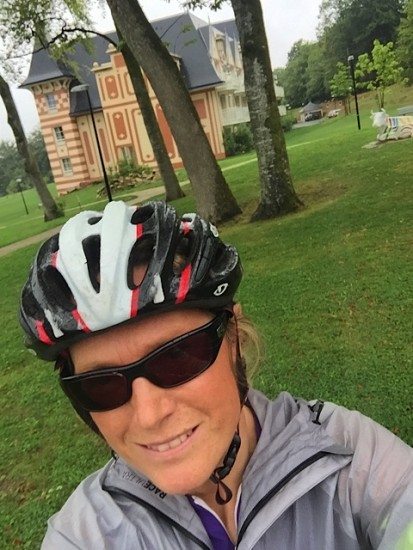 The day began with rain… and the rain never stopped.

At each junction, where country roads intersected the old railway line, I wondered if I should try a new route.

At some junctions I did veer off the greenway for a while but the navigation on a rapidly decharging iPhone in the rain and with blurred rain-splattered glasses was almost impossible. Each time, with growing regret, I returned to the shitty-gritty greenway.

(It is amazing what poor weather can do to a normally superb cycle way. Just two years ago I whizzed along this very route in dry conditions and thought it was a bit boring but so wonderfully easy to ride.)

Back in the torrential rain, I continued to puzzle over the navigation.

The route was meant to be straightforward following a greenway on the Veloscenic Mont St Michel to Paris route but it simply felt like it was going on and on. For. Ever.

No doubt, the scenery was stunning. But I couldn’t see anything other than a blur created by the non-stop rain on my prescription spectacles.

I almost crashed into fallen trees.

I rode over branches, twigs and rain strewn debris.

I wailed inside my head. I cursed the conditions and the cycle way.

I cried and sobbed out loud. 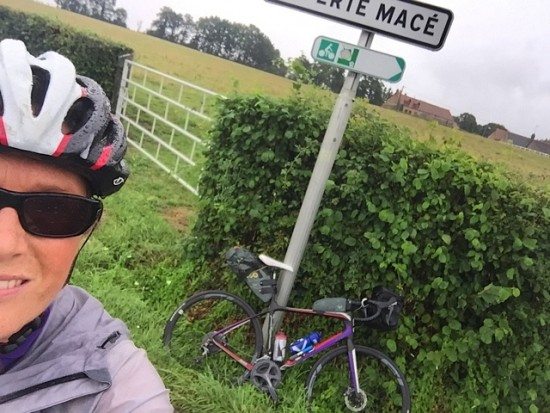 I even phoned the G-force back home in Glasgow and asked him what I could do? He could do nothing (obviously) so instead he worried for me.

The when he phoned me back to check I was okay I barked at him and told him o I f*cking wasn’t. It was that bad.

Numerous times I stopped pedalling, checked my location and queried (vocally and loudly to myself) how I could still be so freaking far from my destination of Nogent Le Retrou.

I heard myself cursing and muttering: “I can’t go on. I don’t know what I will do.”

I considered curling up on the side of the soaking and filthy cycle track and never getting up again.

I worried about a puncture and how I would fix it with solidly numb hands.

I shivered uncontrollably every time I stopped so I stopped stopping as much yet still that railway path went on in one long line.

This all sounds so melodramatic but I was exhausted, bewildered, down-hearted and disillusioned.

And yet, I managed to keep cycling.

Onwards. Tediously slowly I rode what was meant to be the super direct route from Alencon to Nogent.

If I had imagined that the weather in France could be quite so awful in August I would have packed more clothing. But I didn’t – and I hadn’t.

Yet there was little I could do. I had a schedule to keep to because I had booked a flight from Paris to Glasgow a few days later and I had to arrive there on time.

And somehow I found the strength to keep pedalling. I dug deep into an inner reserve of mental and physical determination that I had no idea was there.

It was by far the worst day of cycling that I have endured and eventually after diverting on to a busy and gloomy road for the final 15 miles I made it to Hotel Scully.

It was late but the owner was very kind and jolly. He assisted me in washing down my bike, finding my way to my room and then pointing me in the right direction of a restaurant for a much needed meal and wine.

I drowned my sorrows in vin rouge and then Facebook messaged.

I want to say thank you for all the kind words from friends and acquaintances.

One pal told me that my tales of woe were a much better read than my messages of happy cycling in sunny weather. Maybe so, but I don’t fancy repeating the day just for this benefit.

Fortunately, I awoke to a dry day and although not super sunny in the morning I was able to ride with a positive mind again and in clothing dried overnight on a bathroom heater.

Once I’d washed the grit from my clothing and then washed the clothes I could dry them on a small bathroom radiator.

I can look back and almost smile when I think of this day on my bike but it’s not a proper smile. It’s a smile that is more like a grimace.