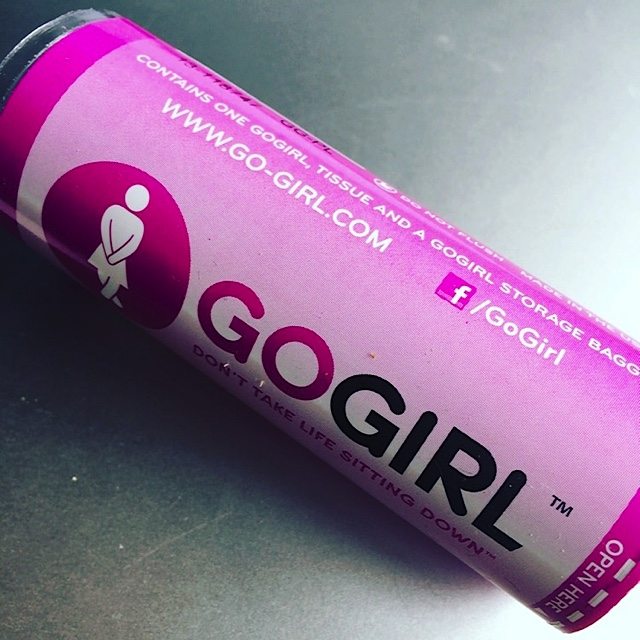 I have been sent a GoGirl to try. It is a device that allows me to pee standing up like a guy. Here are my thoughts.

I have previously tried a She Wee and a She Pee. With both I ended up with pee down my trousers leg. On one memorable occasion (for all the wrong reasons) I tried the urination device at the start of a walk, just as we got out of the car.

It leaked and I had to endure wet trousers for the first half of the walk. During the second half of the walk, the dried pee turned whiffy. So, I wasn’t too keen to try another peeing device for ladies.

To be honest, I find the crouching position fine when needing a pee in the great outdoors. I find it fairly easy to slip away, squat down bare bottomed and go for a pee.

In fact, I quite like the outdoors toileting experience. I usually find a quiet spot away form the people I am with and enjoy the fabulous views as I take a pee. It’s the same whether I am walking, running or cycling.

However, I guess, there are some moments when peeing while outdoors is a little trickier. For example, when there is a large group and few trees or large rocks to hide behind. Or when at a wild camping location with a group of friends. But, if I am honest, this is rarely the case.

Still, I was sent GoGirl to try so I will tell you how it went.

The GoGirl device comes in a small tube, about 10cm long. It looks quite funky. Once I managed to get the lid off (this was surprisingly difficult and ended with the lid pinging off across the room) I found three items inside: The urination device, a plastic bag with a sealing label and a square of toilet paper.

The plastic bag is for stowing the device after use and during transit from outdoors activity to sink/home where you can then wash it. The toilet paper is obvious.

The GoGirl looked like a fairly obvious gadget. It is made of silicone and it is very flexible. You fit the wide neck of the gadget around your nether regions and make sure there is a good seal. The narrow part of the device acts like a funnel so you can point the pee to go in a certain direction.

The instructions told me: “By using your thumb and middle finger, stretching from front to back” you can create a good seal. Without a good seal it will leak as you pee. GoGirl also states: “Applying too much pressure on the sides can cause it to collapse, which can break the seal in the back.”

Usefully, too, the device has “up” written at the widest section. I shudder to imagine who might turn it up the other way to use but there are all sorts in this world!

So, I gave it a try at home. I managed to get a good seal and the pee came out of the narrow nozzle and into the toilet. There was no leakage, which was good because I was wearing clothes.

I was quite nervous about “letting go” to pee in case there wasn’t a good seal but it went well once I did.

I confess it felt very strange standing up at the toilet (like a guy) and peeing. It was important to get a good flow and to keep the flow going because otherwise the narrow nozzle dripped a bit (this will be why so many men end up dribbling pee on to the toilet rim!).

You can point the GoGirl device in the direction that you need the pee to go but if the flow isn’t good enough it drips a bit, rather than flows out.

I was impressed by how good the seal is and how well the gadget works. It was a bit of a faff carefully removing the device in case it dripped pee but I managed it without any dampness thank goodness.

But! And this is a big “but”. To get the device to fit over my nether regions and to make sure the seal was good I had to do an awful lot of fannying around (that’s a technical term and poignant given what this gadget is used for.)

Stop reading now if you are prudish. To get the device to fit properly I needed to have my trousers fully undone and my pants pulled down at the front. It wasn’t at all discreet and thankfully I was in the privacy of my own bathroom.

I can’t imagine trying to do this in a group of people and if I was to move away from the group to use the device I think I would simply discard it and crouch down.

In fact, I usually wear back access bib shorts and simply crouch down behind a tree when I need to pee.

If was walking or running I’d be wearing underwear and trousers or running tights and so I’d need to manhandle the front of these to pull them down to then insert the GoGirl device and hold it in place firmly with two hands. I might become expert enough to use one hand only but it would still require a fairly high level of front bottom exposure.

It just seems like far too much hassle and I am fairly sure I’d display some of my nether regions by accident.

Perhaps there are people who prefer all this fuss but I think it’s a lot more hassle than going for a pee by simply crouching down with a bare bottom somewhere like behind a bush or a large rock.

The GoGirl does work if you get the seal right. It’s just that holding it in place to get the seal right requires you to have your trousers and pants pulled down at the front and your hands doing the sealing. So, in practice, the GoGirl requires far too much front bottom exposure for my liking and I think I’ll just carry on with my usual method of finding a quiet spot to squat.

However, someone (his name is Willie, actually!) on my Facebook thread has suggested a good use for this device: “Using it to pee your name in the snow!” How brilliant!

You can buy GoGirl on-line for around £10. Also see GoGirl for further info.