The UK’s Marcus Scotney ran down the track towards the Cape Wrath lighthouse at 11:05 on Sunday  May 29 to become the winner of the first Cape Wrath Ultra. Running strongly, he arrived in the lighthouse compound high up on the cliffs in the far north-west of Scotland and was directed into the tiny yet welcoming Ozone Café to punch in for his finish time.

Marcus, from England, had run a controlled and measured race from the start to win the inaugural Cape Wrath Ultra in an impressive 41 hours 40 minutes. He said: “The Cape Wrath Ultra is a truly stunning and amazing route up through the Highlands of Scotland.

“No two days were the same and each one offered something different. Day four around Beinn Eighe was the most stunning, even with the pathless section. I always wanted to run around that mountain.”

He added: “I discovered how far I could push my body each day and I found out a lot about myself. I  will definitely want to try more multi-day runs. I don’t know if any would compare to this, as the Cape Wrath Ultra is unique.”

Having staggered the start times earlier that morning, the runners arrived at the Cape over the following hours, including the ladies’ winner Ita Emanuela Marzotto from Italy, who spoke to Rob Howard from SleepMonsters.

She said: “Twice I was so close to pressing that emergency button. I had no energy, nothing, but I kept thinking of my son, Ettoro, who was waiting at the finish and that helped.

“Everybody was so supportive, so encouraging that I couldn’t give in to exhaustion even though I fell on the road right at the end.

“This race is the hardest thing I’ve done and harder than the 1- day race in Australia or the Marathon Des Sables.”

What is the cape Wrath Ultra?

The Cape Wrath Ultra is a 400km, eight-day ultra-running expedition through some of the Scotland’s most inspirational landscapes, including Morar, Knoydart, Kintail, Torridon, Assynt and Sutherland.

The event starts from Fort William in the Outdoor Capital UK.  The route is based on the Cape Wrath Trail, which is considered to be the toughest long-distance backpacking trail in the UK.

It crosses rugged landscapes, genuine wilderness and has great distances between support points. Hikers usually take at least 20 days to complete the trail.

The Cape Wrath Ultra route is a massive challenge to experienced runners and adventurers. Competitors will have none of the complex logistical worries that hikers have when completing the similar Cape Wrath Trail or other long distance footpaths, such as the Pennine Way.

Shane Ohly, the event director, said: “The almost perfect weather certainly helped increase the overall finish rate with 59 out of 95 starters completing the full course to give a finish rate of 62%, which is about double our pre-event expectations.

“I am absolutely delighted that so many of the participants were able to experience the full course, because the journey is totally incredible and I am confident the experience will leave a life long impression.” 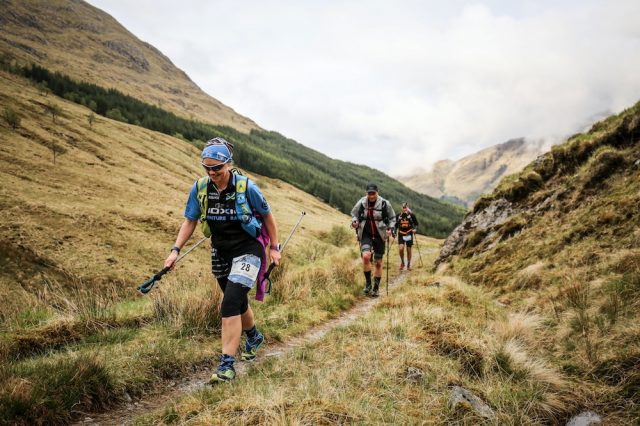 The Cape Wrath Ultra certainly has left an impression on the competitors and event team who have been unanimous in their praise for the event on social media after the event.

Roxane Andersen, who finished 47th, said:  “What an adventure. through 400km and 11,200m of up and down. I’m sure that I left a bit of my heart somewhere along the Cape Wrath Trail.

It’s amazing how quickly the pain disappears and all that remains of those eight days are the good memories of amazing places and beautiful people!”