The Scottish Wildlife Trust has created the North West Highlands Snorkel Trail. I reported on the new venture in my Sunday Mail column. You can see the pdf or read the story below. 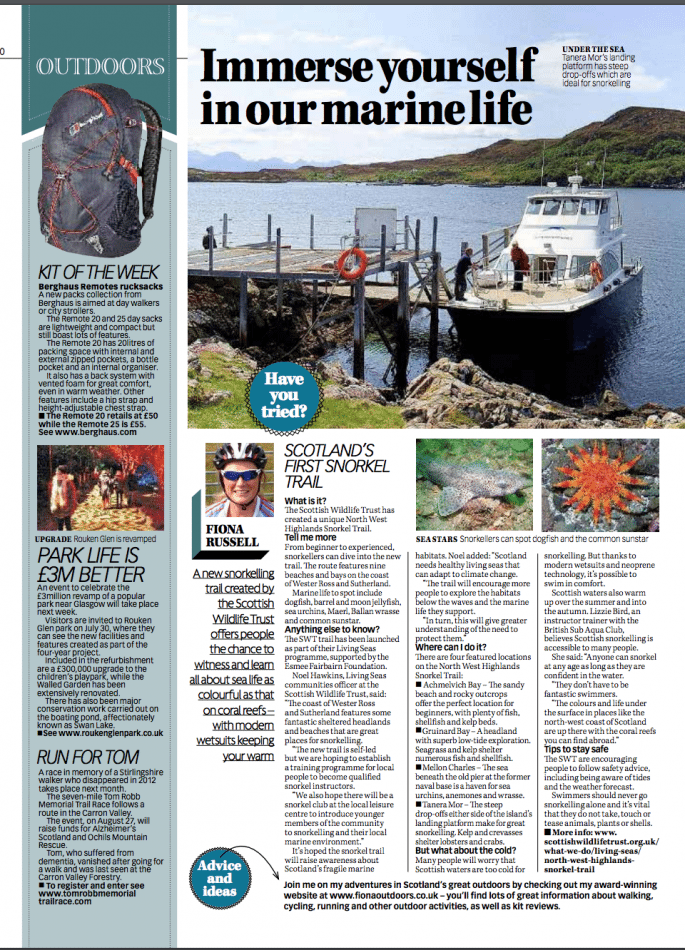 What is it?: The Scottish Wildlife Trust has created a unique North West Highlands Snorkel Trail.

Tell me more: From beginner to experienced, snorkellers can dive into the new trail.

The route features nine beaches and bays on the coast of Wester Ross and Sutherland.

Highlight locations include Tanera Mor in the Summer Isles, Camusnagaul and Achmelvich Bay.

Anything else to know?: The SWT trail has been launched as part of its Living Seas programme, supported by the Esmée Fairbairn Foundation.

“The new trail is self-led, but we are hoping to establish a training programme for local people to become qualified snorkel instructors.

“We also hope there will be a snorkel club at the local leisure centre to introduce younger members of the community to snorkelling and their local marine environment.”

“The trail will encourage more people to explore the habitats below the waves and the marine life they support.

“In turn this will give greater understanding of the need to protect them.”

Where to go: There are four featured locations on the North West Highlands Snorkel Trail

But what about the cold?: Many people will worry that Scottish waters are too cold for snorkelling.

However, thanks to modern wetsuits and neoprene technology it’s possible to swim in comfort.

Scottish waters also warm up over the summer and into the autumn.

She said: “Anyone can snorkel at any age as long as they are confident in the water.

“They don’t have to be fantastic swimmers and the best thing is it’s a way to look at a world that you rarely see.

“The colours and life under the surface in places like the north-west coast of Scotland are up there with the coral reefs you can find abroad.”

Tips to stay safe: The SWT is encouraging people to follow safety advice, including being aware of tides and the weather forecast.

Swimmers should never go snorkelling alone and it’s vital that they do not take, touch or tease animals, plants or shells.