Have you tried: Open water swimming?

Open water swimming must be one of the fastest growing outdoor sports in Scotland. I wrote a column about the pursuit in the Sunday Mail – and took a look at the many open water swimming events. You can see the pdf or read the article below. 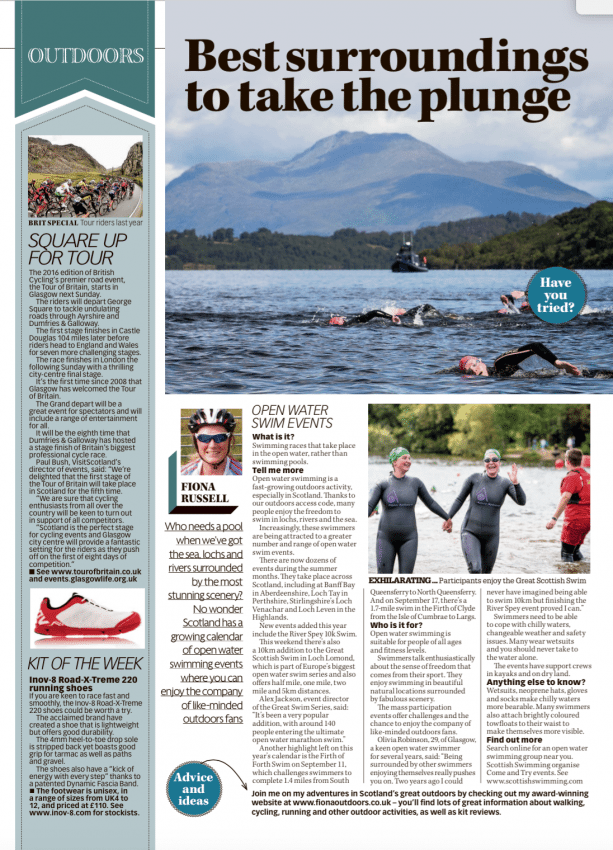 What is it?: Swimming races and events that take place in the open water, rather than swimming pools.

Thanks to the Scottish outdoors access code, many people enjoy the freedom to swim in lochs, rivers and the sea.

Increasingly, too, these swimmers are being attracted to a greater number and range of open water swim events.

In Scotland, there are now dozens of events and distances to choose from during the summer months.

The events take place across Scotland, including Banff Bay in Aberdeenshire, Loch Tay in Perthshire, Stirlingshire’s Loch Venachar and the Glencoe Open Water Swim in Loch Leven in the Highlands.

New events added to the calendar this year include the River Spey 10k Swim and, this weekend, there’s a 10km addition to the Great Scottish Swim in Loch Lomond.

Alex Jackson, event director of the Great Swim Series, said: “We added the 10km distance this year because lots of swimmers who began open water swimming at our events were asking for bigger challenges.

“When we opened entries for the Great North Swim earlier in the year the first 100 places sold out immediately and we had to add more.

“It’s also been a very popular addition to the Great Scottish Swim with around 140 people doing the ultimate open water marathon swim.”

There are still a number of Scottish open water swim events to enjoy this year, including Loch Ard swims of 1km, 2km, 3km, 5km, 10km and 12.5km, organised by Vigour Events, on September 3.

On the same day, the Firth of Forth Swim challenges swimmers to complete 1.4 miles in the sea from South Queensferry to North Queensferry.

Meanwhile, on September 17, swimmers can take on a 1.7-mile challenge in the Firth of Clyde from the Isle of Cumbrae to Largs in North Ayrshire.

Who is it for?: Open water swimming is for people of all ages and fitness levels.

The swimmers talk enthusiastically about the sense of freedom that comes from their sport.

They also boast of the rewards of the unique challenge, including improved physical and mental health.

The mass participation events offer further challenges and the chance to enjoy the company of like-minded outdoors fans.

However, swimmers also need to be able to cope with chilly waters, changeable weather and safety.

Many wear wetsuits, although not all, and it’s recommended that swimmers always take to the water with others.

The events have support crews in kayaks and on dry land.

Olivia Robinson, 29, of Glasgow, has been a keen open water swimmer for several years.

Her love of the sport started when she discovered the convenience of sea swimming close to her family home on the Black Isle.

She said: “I found it was far simpler to walk from our home to the sea rather than travel to a swimming pool.

“I also discovered I liked the challenges of sea swimming, such as swimming hard against the tide and drifting back on the tide.

“I loved watching the changing scenery around me and on the sea floor as I swam so it felt a lot more interesting than swimming lengths in a pool.”

This year, she has focused on longer challenges, setting herself the goal of the River Spey 10km.

Olivia, an events management graduate, said: “I like to have a goal for swimming so that I have something specific to train for.

“I have had more time for training since graduating and this has allowed me to combine more sessions in the pool with coached swimming at Glasgow Triathlon Club.

“As often as I can I swim in lochs near to the city, such as Loch Lomond and Loch Ard.”

Olivia believes that the atmosphere of the events helps with longer distances.

She said: “Being surrounded by other swimmers enjoying themselves really pushes you on.

“Because it’s an organised event, too, you have support, such as food stations, and a target of the finish line.

“Two years ago I could never have imagined being able to swim 10km but finishing the River Spey event proved I can.

“I was amazing to take part in and very rewarding to complete.”

Olivia also swam 5km in the recent Glencoe Open Water Swim and will take part in the Great Scottish Swim.

Next month, she will swim the Cumbrae to Largs challenge event.

Anything else to know?: Swimming open water can be dangerous, especially if you get into difficultly in deep water on your own.

It’s recommended that you swim with other people and preferably as part of an experienced group.

Find out more: Search on-line for an open water swimming group or club near you.