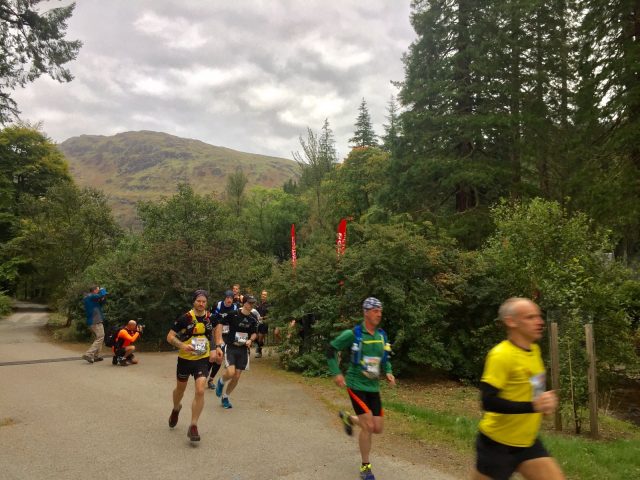 The first runners head out for the Dunoon Ultra 50k.

I had decided that I would enter my first ultra running event to simply enjoy the experience. I wanted to soak up the atmosphere of the inaugural Dunoon Ultra 55k, take in the beautiful views of the Cowal Peninsula and speak to the other runners to find out what they like about ultra running.

I chose the relay option, racing with two friends, because I am not an experienced long-distance runner. I thought I might manage one of the shorter legs and I chose the “flatter” Leg 2 two along the side of Loch Eck.

So why did I end up on Saturday morning, as I started my leg of the ultra race, pushing out a pace that I could hardly expect to hold on to for 5km let alone the full 16km?

Why did I have to remind myself to look up at the truly gorgeous landscape instead of focusing solely the track ahead?

Why did I pass other competitors with glee and look ahead for the next one to overtake?

Why, for goodness sakes, did I tell myself to keep running hard up the hills even when my brain screamed: “Stop! Now!”?

And why, during the final 6km of my section, when I was running further than I’d run in one go for at least a year, did I will myself on by counting steps every kilometre? Surely I had gone mad?

I did all this, even though I’d intended to run a relaxed 10 miles and well within my comfort zone, because: 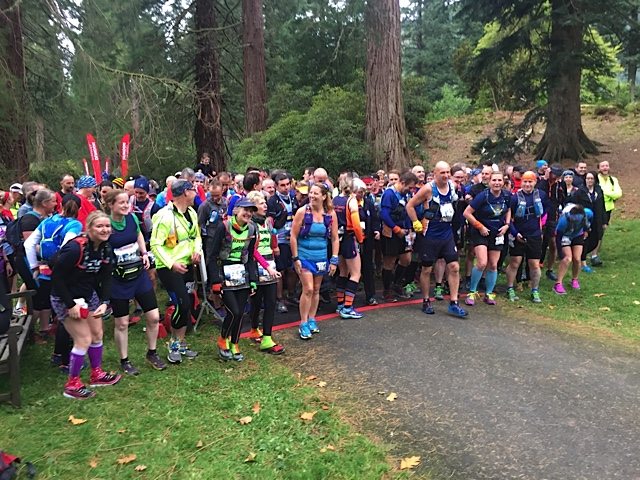 Start line of the Dunoon Ultra on Saturday.

It was no surprise to find that some 200 people had turned out to run the first ever Dunoon Ultra 55k. Ultra running must be one of the fastest growing sports in the UK and many runners seem keen to try new events – and more events.

It was heartening to see such a large crowd of people gathering at the start of the race at Benmore Botanic Gardens. Among the many solo runners there were almost 20 relay teams of three people.

It felt like we were setting off on a proper adventure, too. To reach Dunoon my team travelled by car from Glasgow to Gourock and then a short ferry journey to Dunoon. I love arriving at places by ferry.

Looking around at the start venue there were many runners who looked like racing whippets, but it was also remarkable to see the wide range of shapes, sizes and ages, too. The chat was friendly and as 10am grew closer it was tinged with a growing air of nerves. Thankfully the weather looked set to be calm and mild. 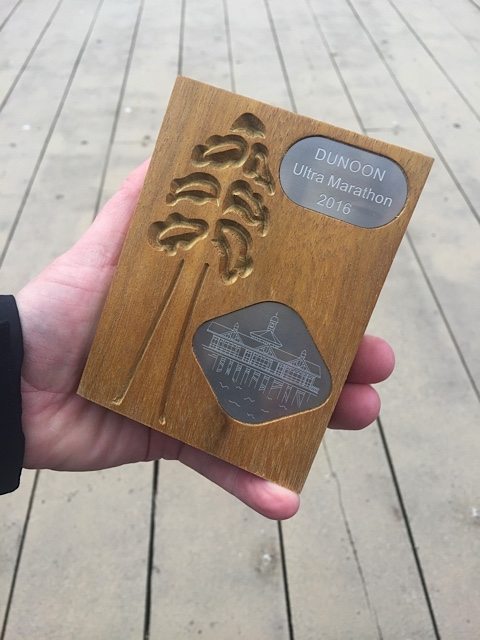 Trophies made of wood from the old Dunoon pier. 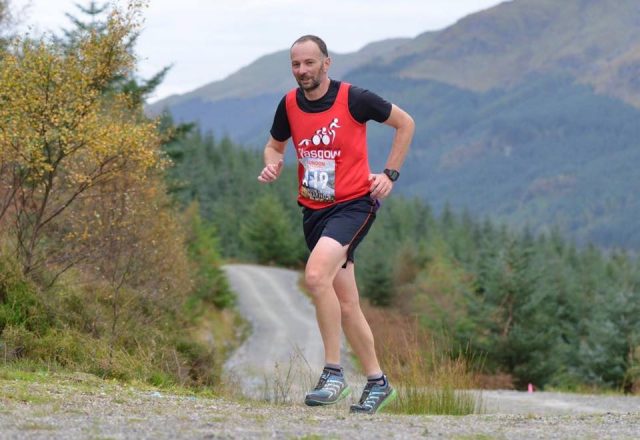 Thanks to Alan from Dunoon Hill Runners for the photo.

My Glasgow Triathlon Club friend Nick was keen to run the longer and tougher section of the Dunoon Ultra. He is currently training for the Dublin Marathon so he has been running far further than me in training. He also loves a challenge.

The race notes warned of a fairly stiff hill climb and while this tested many people they also enjoyed the scenery and the views.

After the event Nick told me: “It was such a lovely start to a race. We climbed through Puck’s Glen, on a narrow, winding path and up lots of stone steps. The sides of the glen were beautiful moss-covered rocks and high above were tall trees.”

It sounds like a scene from a fairy tale.

He added: “It was quite a tough climb to the highest point of this race at 300m. We ran lots of smaller ups and downs and then there was the drag to the top. But the views from that height were lovely. And then there was a great downhill to enjoy.”

Nick was grinning as he raced down the forest track to hand over to me at CP1.

I had felt nervous all morning. Despite telling myself that this was “just for fun” I felt my stomach churning for hours before the race. I tried to focus on enjoying the atmosphere of the event and chatting to our third team member, Lucja Leonard. Although I had interviewed Lucja for a story during the summer I had never met her so we had lots to talk about.

Then I saw Nick striding out down the forest trail. I quickly zipped off my insulated jacket, high fived him (race protocol for the hand over) and grabbed our team watch (the Suunto Spartan Ultra).

The first part of my section required concentration as I attempted not to slip on the mud while also attaching the watch to my wrist. Then, after a short run along the side of the A815 we headed back off-road towards the shore of Loch Eck. 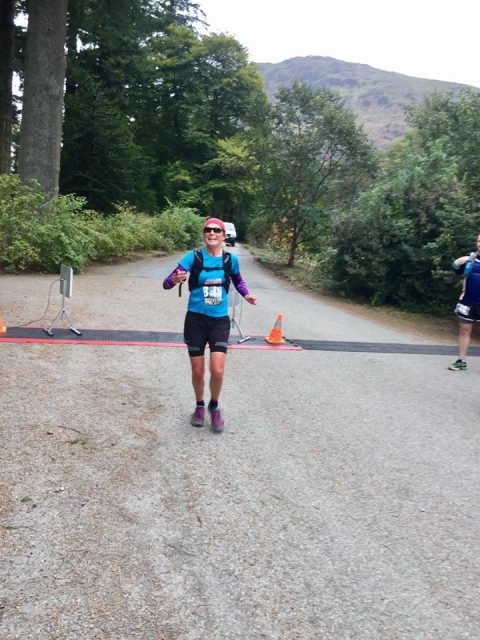 Smiles after the pain for my run.

I remember thinking how gorgeous it looked during the drive to CP1 but for ages while running I hardly even glanced at the still, picturesque waters. I passed a few other runners, including a couple of soloists and a relay runner. It was nice to exchange a few words of encouragement.

One soloist told me: “It will be harder for you because you’ll be running at a good pace as part of the relay. For me, it’s more of a comfortable jog. I prefer what I am doing.”

With those words filling my had I felt I should try to run a bit faster than him otherwise he might think I wasn’t putting in enough effort.

Although leg 2 was billed as the flatter part of the whole race it did include lots and lots of ups and downs. I found it hard to get into any kind of even stride and I was worried that if I kept pushing quite hard that I would collapse at about 10km (the furthest I’ve run for many months).

But still I couldn’t make myself slow down – and so I just kept running and hoping that all would be well.

After a few more kilometres I saw another relay runner ahead and passed her on a flatter section. I caught another on a hill and while she had stopped for a walk uphill I forced myself to run on.

Each kilometre seemed to go by as slowly as a mile and I wondered if the watch had been set to vibrate in imperial distances rather than metrically. A glance down revealed I was being an idiot! I have no idea how a kilometre can feel so far when you are running.

Slowly but surely the kilometres passed by and no one overtook me so I guessed I must be running fairly well. 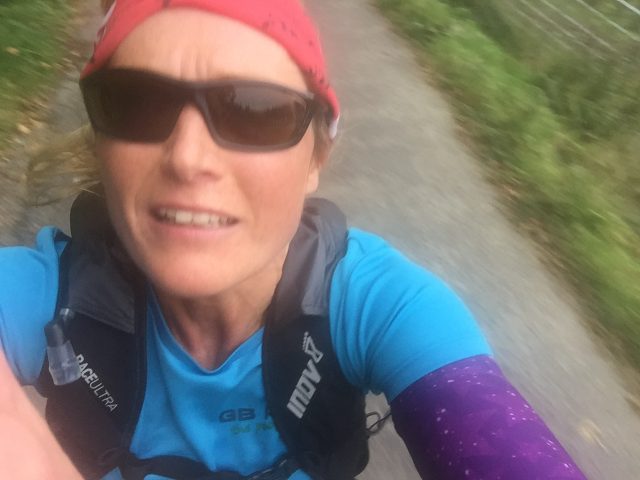 However, that loch just seemed to go on and on! I knew at the outset that I’d need to run the entire length yet at halfway it seemed incomprehensible that I still had another 8km to go.

I did try to look around and enjoy the views, just as I’d planned, but there is something about racing that makes you focus on the ahead. It was a very nice trail ahead, thankfully, and although I started to curse the numerous ascents it also allowed me to enjoy the many descents.

For the final kilometres I began to count my steps. I worked out that I run about 500 alternate steps per 1km. That meant I had only 1500 double steps to run to reach CP2. I kid you not, I counted every single one of them.

It was a hard run for me but I found, as usual, I still had enough for a short sprint to the hand over. I could hear other people cheering and the photos show me with a big smile on my face.

Lucja takes us to the finish line

If Lucja had imagined she was joining a non-competitive team for the Dunoon Ultra she was suddenly made to rethink at CP2. Our team was now lying in third place and so she set off to try to run as hard as she could to keep this potential podium position. 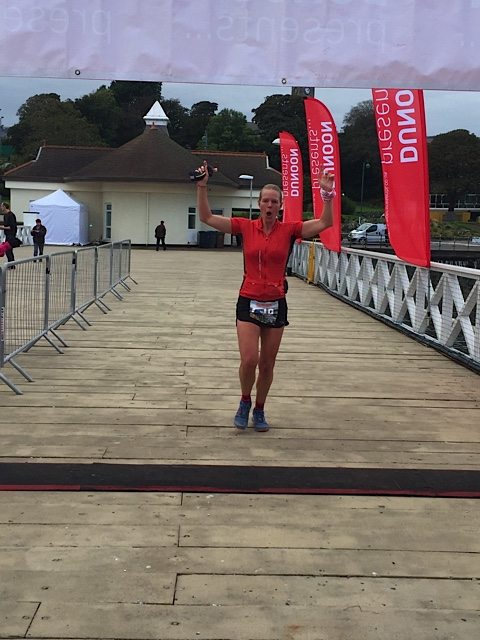 Lucja crosses the finish line for our team.

In fact, her section of around 15km is a distance she would normally consider to be a warm up run! Lucja admitted afterwards that she felt under pressure to do well.

She says: “I knew we were in a good place when Fiona came into CP2 and I didn’t want to let my new teammates down. I ran as hard as I could although there were some tough hills in that section.

“I just tried to pass as many people as I could and to not let anyone else pass me.” 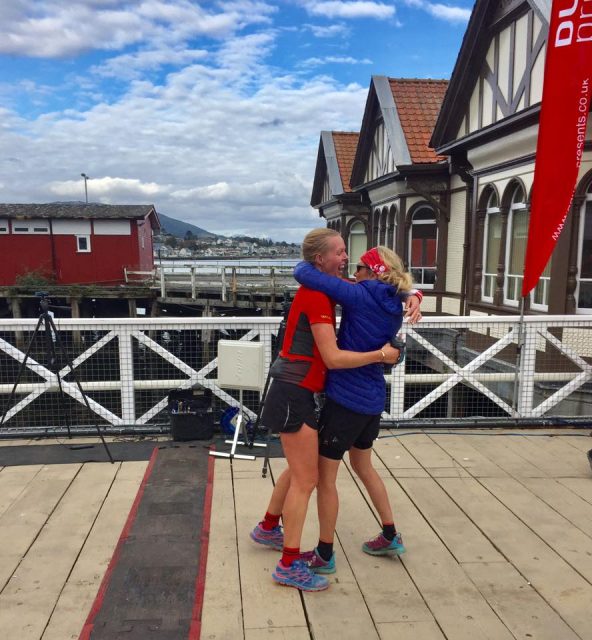 Team hug at the finish line.

It turned out she did more than enough and brought us home as the 2nd relay team overall and the 1st placed mixed relay team. We were surprised and thoroughly delighted. 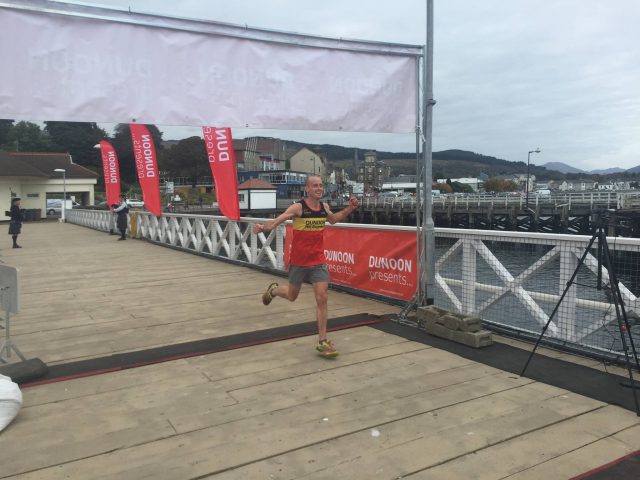 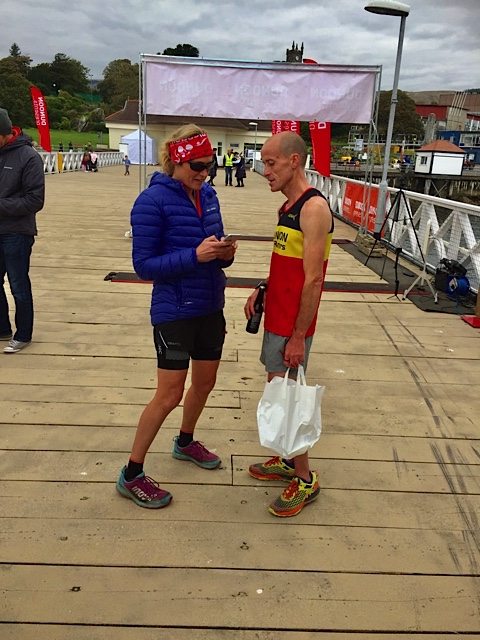 I catch up with the winner Michael at the race end. 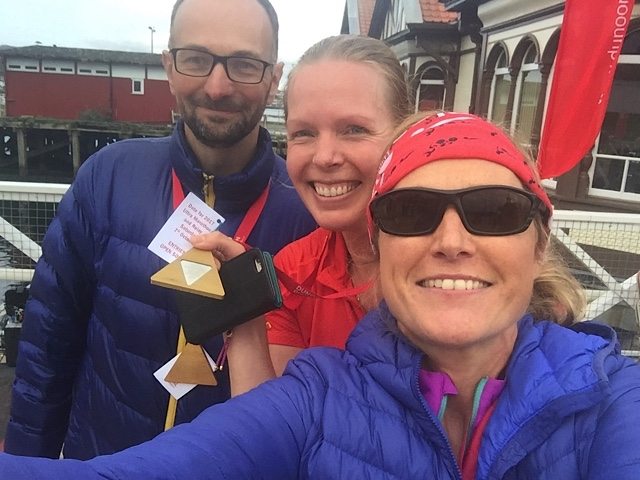 Our happy team, Nick, Lucja and me.

It was very enjoyable to be at the end of the race on the refurbished Dunoon Pier. Watching the other runners finish was inspiring and to see four solo runners coming in ahead of us in some very good times was humbling.

The first placed male was local man Michael Tweedley, 45, of the Dunoon Hill Runners. He was very pleased with his incredible 4:13:38 (that was more than 40 minutes ahead of our team run).

The event was organised by Dunoon Presents and the Dunoon Hill Runners. 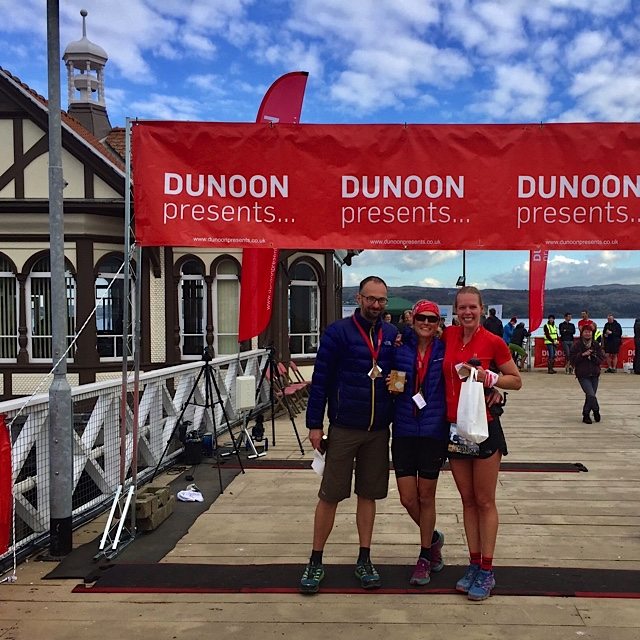 Goodie bags included amazing medals and trophies (poignantly made from the wood from the old pier), beer and wine, as well as a t-shirt. The food spread (included in the entry cost) was superb, too, with hot food, fantastic cakes and teas and coffees.

It is a race I would highly recommend and if I can ever work out how to run further than about six miles in relative comfort I would love to try it solo some day.